In a new series of abstract artworks, I’m exploring an overlap of areas that interest me: simplicity, meditation, solitude, spirituality, nature, clarity, connection, circles, balance, abstraction … I’m choosing to use only black, blue and white in this work.

I’ve come to the abstract visual of rock cairns as a means of expressing so many of these elements in simple yet meaningful visuals. There is a quietness and steadiness to stones, and with them a capacity to build something greater than the sum of the parts.

A cairn, to me, represents a point of focus for honor and respect, a recognition of that something greater. It represents a connection and co-creation with nature. It serves as an altar to the gods.

Cairns have a long history that threads through connection, spirituality, functionality and creativity.

The word cairn comes from the Scottish Gaelic word càrn. It refers to the human-made stacks of stones that have been used since at least the Bronze Age for varied reasons: ceremonial burial, geographic landmarks, protection and trail markers, among other reasons.

Some of the historical structures were built quite large. Some of them extend upward like modest towers. Others form circles, lines or broader piles. 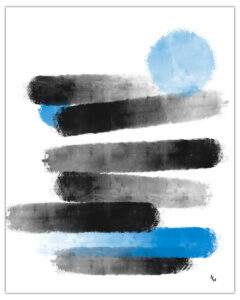 The practices and purposes for stacking these stones have existed around the world for millennia. Naturally, different cultures have used their own words to refer to them: inuksuit in the Arctic region of North America; taalo across northern Africa; ovoo in Mongolia; gromila in Croatia; and ahu in Hawaii, to note a handful.

In Scandinavia, large conical piles of stones are used as sea markers for navigation, standing on small islands and on shorelines. They also are used to serve as cliff and terrain warnings.

Rock cairns also are used to signify sacred spaces, like around Buddhist temples in Korea, where visitors and practitioners at these temples add stones to the cairns as an act of respect.

Some scholars of Greek mythology think that the name Hermes, protector of travelers, derives from the Greek word herma, which means “a heap of stones” or “cairn.” Hermes is said to have been buried under the first cairn. (Source)

Mythology says that Hermes was put on trial by Hera for slaying her favorite servant, the monster Argus. The other gods acted as jury. In declaration of their verdict, they threw pebbles at whomever they determined was in the right, Hermes or Hera. Hermes ended up buried under a pile of pebbles, and thus was buried by the first cairn. (Source)

Simplicity. I feel like I have been on a many years long quest to simplify. Everything. It’s something about tapping into essence, about distilling things down to what really matters, what really is true.

Making art then, of course, serves as an outlet for me to explore a way of seeing, processing and communicating my experience, or my interpretation, of things. Of life, living.

Importantly though, this is not about negating the complexity of life or refusing to see, feel and know the shades of gray that lie between white and black, which really are just the extremes on the spectrum of gray (grayscale).

It’s about practicing, creatively and spiritually, distilling that complexity and vast grayness into clarity and understanding. Like poetry.

Poetry is about distillation. It’s about refining one’s way of seeing, interpreting and sending signals back out to the world. It’s about maximizing density of communication using an economy of words. Or, in the case of these abstract visual works, an economy of strokes, shapes, colors.

Like I said, and you can surely see in the artworks, I have clarified the palette for these abstract cairns to gray (black, white) and blue.

White most often is in a supportive, negative-space role. Black is the simplest, starkest expression of the strokes I make against the white canvas; it provides the skeleton. The spiritual heart of the matter, to me, is the blue. 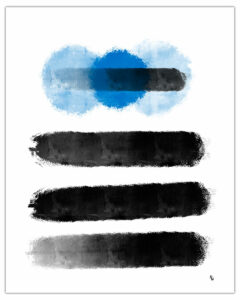 Blue. There are so many interpretations of what the color blue represents that I start to wonder if there’s anything that it doesn’t represent. It starts to feel like I can claim blue means anything I want it to mean. And I suppose that’s true of about anything — we believe what we want to believe — especially in the subjectivity of art.

Of course, blue also is often associated with sadness and melancholy. It can be connected with a conservative, conventional and cautious personality. Among other things, I’m sure.

So, while knowing we all can see ourselves how we want to through interpretations like this, I’ll say: Those words actually do a pretty good job of speaking to things that matter to me, and always have mattered to me.

In these abstract cairns, how I use blue usually is meant to go beyond the rocks of the cairn structure. The blue is there as a spiritual something.

Sometimes it appears in a bigger and/or bolder way. Sometimes it’s subtle, a blue sun peeking out at sunrise. It’s a buoyant energy for the stones. It’s a calming effect on what otherwise might seem precarious and out of balance. It’s the spirit of each piece.

The blue, I think, represents me or the creative spirit in me — or you, the viewer of the image. I might well be infusing my own spirit and sensibilities into the work through that blue, but I also imagine someone (you) holding pieces of this work and seeing yourself, your spirit of good and humanity and creativity and worth in it, too.

Circles. Just like with the many spiritual meanings and interpretations of blue, circles are thought to have a lot going on.

In circles, we can see the Self, wholeness, the infinite, cyclical movement, the divine, transcendence, inclusion, completeness, the life cycle and on and on …

Likewise, the black strokes I make in these abstracts of cairns, though typically drawn straight, echo the simplicity and spiritual focus of Zen brush painting for me.

And the blue I use takes on the shape of the ensō, a circle.

All in all … I’ve think I’ve always had an affinity for blue above all colors, and for circles above all shapes. I am confident that’s not rare, but it does say something about how and why those elements are factoring into this creative work of simplicity, meditation, spirituality and balance with abstract cairns.

View the Cairn Abstracts catalog in my online shop.