My Morning Pages Journaling Just Might Serve A Purpose Beyond Myself

I write a few pages in a journal every morning. They’re what Julia Cameron, author of The Artist’s Way, calls morning pages and recommends as a creative tool to clear our minds as the start to each day.

And I wonder if anyone else ever will read those hand-written pages of mine. Will they be of interest to my sons (and beyond) in the future? Or will I ever do anything noteworthy enough in this life that they become known not only as my years’ worth of journals but my “papers”?

In short, are they worth anything beyond the moments I spend with them in the early minutes of each day and in the collective personal practice that it is for me?

Candidly, I hope so, as I pretty much always hope what I do has value that extends beyond myself, my own interests and uses. And if my sons or others close to me carry the curiosity and sentimentality I do … well, they’ll feel like I do right now, having recently found (again) my grandmother’s travel logs.

My maternal grandmother, Muriel, has been gone since 2006. She didn’t get to meet my and my wife’s two sons. She didn’t get to know of our moving from the Midwest to Colorado years ago. Or of many other things in my life; and there was much I didn’t know about her’s.

But in yellow pocket-sized ledger books she used as travel logs, hand-written and spare in details, I not only get to glimpse something more of my grandmother than I had known when she was alive, but to see how our lives have unwittingly overlapped across decades and stories that largely have run independently of each other. 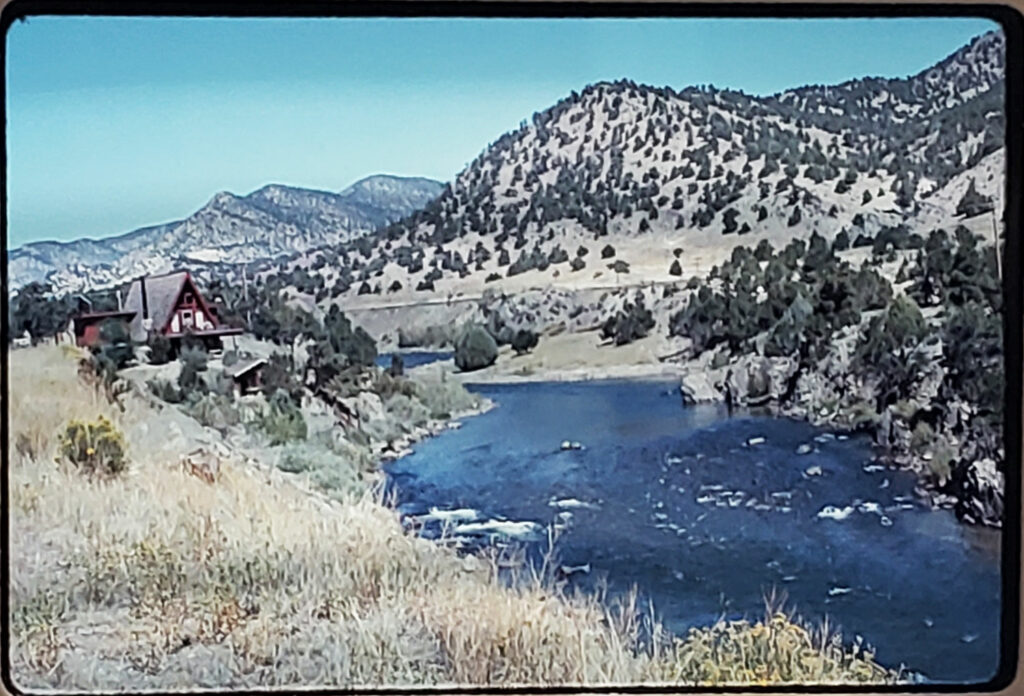 Prior to finding these travel logs, I had known of only one other instance where our travels outside our home state of Missouri, independent of each other, had intertwined.

Ever since, I’ve imagined her standing in the same place at the edge of the Chao Phraya River in Bangkok, looking across the wide water that cuts through the city and admiring Wat Arun, the Buddhist temple known as “Temple of Dawn,” and then crossing the river to see it up close. I was there on a solo trip as a U.S. Army soldier on leave in 2001. Then again with my now-wife, Becca, in 2004.

I have a watercolor painting of Wat Arun that I bought from an artist on the street across the Chao Phraya from the temple. And when I look at it, I think of the common ground I share with my since-gone grandmother who had been there 35 years before me.

So when I opened the yellow, hardbound travel log my grandmother kept on her road trips to Florida and Colorado in 1967, and through Colorado again in 1971 on the way to see Canyonlands and Utah, I was beyond pleased to see familiar town and site names from my own family’s Colorado experiences: Manitou Springs, Buena Vista, Salida, Aspen, Maroon Bells, Pagosa, Durango, Glenwood Springs, Cripple Creek …

She kept details that were functional, budgetary. From an entry in September 1971:

She scribbled math calculations for some of those fill-ups on the left-hand pages, which otherwise often stayed blank. Her route notes and descriptors were saved for the right-hand pages throughout the log, for reasons I can hardly speculate.

As a traveler and journalist myself — currently meaning by my morning practice of writing in a journal but also formerly as a newspaper writer and editor — I am fascinated by what she chose to write. And I am at least as curious about what she chose not to note.

How and why did certain details stand out to her as noteworthy? What sparked a little comment or sentiment here but not there? Did she have any intention of recording or telling the stories I now draw from her notes?

I sometimes struggle to make out her handwriting, which seems to be sprinkled with what I can only think were marks of shorthand, an amazing skill that predates me by some years. Thankfully, her use of shorthand was surrounded by context I usually can understand.

I would love to have learned shorthand. Though, if I had, it’s virtually certain there would be no comprehension of my present-day journals and whimsies, poems and noted on-the-go inspirations by my sons, or anyone else of my own generation or younger. I am confident I would have used it more frequently than my grandmother did, in an attempt to keep up with myself.

I read my grandmother’s travel log entries, which on their narrow pocket-sized pages necessitate line breaks like poetry, simultaneously with excitement for how our personal stories of geography overlap and with a sort of socio-anthropological interest in the mundane.

From the entry dated Monday, July 17, 1967, and from somewhere in a day spent between Rocky Mountain National Park and Glenwood Springs, in Colorado:

were really eating for us.

So many & so tame. Trying

We came prepared with a

Of particular satisfaction to me from that same entry, my being a father of two sons:

is lovely & a beautiful day —

She underlined the word boys. I’m curious to know why. But I understand the pastime, and the move as a parent. It’s a favored bonding pastime, on road trips and otherwise, for me and my sons (and “mama” sometimes joins the fun, too).

And I think her “boys” reference was to one of my uncles, who was a teenager at the time, and to her second husband, Bob, having lost her first husband to illness many years earlier.

The Gr Sand Dunes can be seen from the road but to drive to them — (22 miles) — walk up & into the dunes is the only way to really appreciate the beauty of such a sight. To slide down the drifts — to feel the hot sand between the toes — It’s well worth the trip & time taken —

I first went to and camped at those dunes for my first time in 2006, only weeks before my grandmother, as it turned out, would die at age 91. I was on a three-month sojourn in Flyover Land, a writer backed by a fellowship and living in a 1975 VW bus I named Boio.

And because so many of my grandmother’s entries remark on the beauty of the scenery, the “nice” meals and so on, I enjoy her candid take on the Yucca Motel near the Royal Gorge in Colorado, dated Thurs. Sept 9 (1971):

On our way. An old

motel but clean — An awful bed — too _____ [Editor’s Note: I can’t make out the writing, which seems to include a shorthand mark] —

Drove this a.m. along

It is just so pretty — my kind

In today’s contemporary world of reviews on Yelp, AirBnB, Trip Advisor, et al, it feels wonderfully dispassionate, objective and … just there, calling it like she saw it and moving on. Good stuff.

That tiniest moment of candor about the bed also serves as a counterpoint to my grandmother’s other notes of positivity. It shows me nuance in her personality. It assures me of authenticity.

It has never occurred to me to consider whether my grandmother was a positive person or not, until now, until taking in the balance of small notes I’m reading in this one travel log.

I like the honesty of her calling out that bed that could have been more. She wrote it in the midst of so many joyful notations throughout her entries (e.g. “my kind of river”). 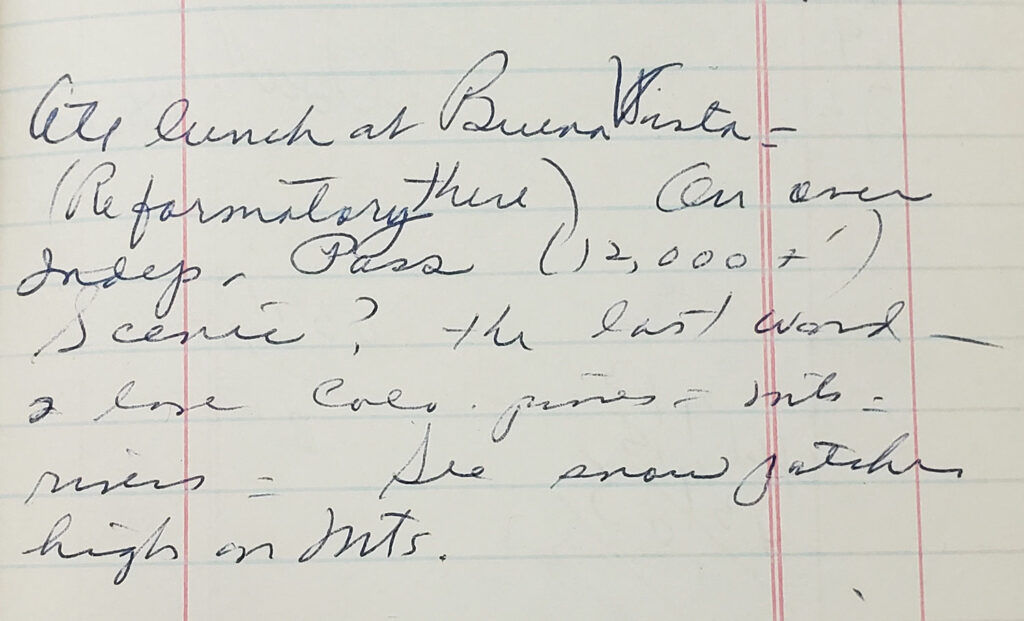 Though, I did a double-take for her adjective about the oversized doll bed in the motel room. I checked to see if she’d really written “cutest.” Other possibilities had come to my mind.

A few years ago, in this same log book, I’d found a travel entry from 1971 that noted Manitou Springs and Garden of the Gods and Pikes Peak. At the time, and up until less than two weeks ago, I lived in Manitou Springs with my family, with Becca and our boys.

We hiked and I ran trails in the Garden of the Gods; it was only a short walk from our house. We made sure we did not take for granted our bedroom view of Tava (Pikes Peak), taking time to start and end each day with a look out the window, plus all the other times we’d see Tava as a part of our daily environment.

And I was happy to know my grandmother had passed through those places I then called home, that we had it in common. Just like we did, almost inexplicably, that river and Buddhist temple and city in Thailand.

And then, having moved from Manitou, only earlier this month, I was going through things and again dipped into this log book. And when flipping pages, what jumped out at me was the name of our new hometown: Buena Vista.

My grandmother had noted it, and the surrounds leading to and from, only two pages deeper into her log past her noting of Manitou Springs. From September 9, 1971:

This is the route [shorthand marks … through the?] Rockies —

filled up at Salida

Into Aspen — Its a fast growing

lots of bldg & [shorthand mark] to

Out to see Maroon Bells —

Its so worth it — One of my

On to Glenwood Spg fr nite

A nice room but too much

On the left-side page, just to the left of those last lines of the day’s entry, an added comment and detail about the cost of the night’s motel room:

Those might be the only exclamation points in the whole book that served as travel log for at least three cross-country road trips in 1967 and 1971. In the efficient noting of their journeys, my grandmother Muriel hinted at her thoughts and feelings more often than she laid them out with measurable depth.

But in that I see and feel an easy, smiling connection to a relationship that, in the physical at least, I thought was left behind nearly 15 years ago.

There’s more for me to dig into with these notes, these memories and suggestions of my relations’ past, especially when meshed with the boxes of 35 millimeter slide film they used to document the sights and, occasionally, each other.

I am envisioning a multigenerational creative collaboration that unfolds over time. Their words and photographs, and my … well, it remains to be seen. Curation, if nothing else.

I don’t know if anyone will feel about my journalings and photographs like I do about these materials of my grandmother. But if her lean words written only on the right-hand side of a small yellow ledger, and from only selected weeks’ events a half-century and more ago, can spark this 2,000-word blog post and creative project ideas that I’m certain will occupy my heart and focus for years …

My journaling just might serve a purpose beyond myself. I hope so.