The Value of Creative Practice

I’ve been contemplating the value of creative practices for a while now. But I’ve been mistakenly doing so, lately, as if it was new territory for me, as if I’ve never tapped into the power of it before.

And then this morning I remembered a series I wrote as creative practice many years ago (I don’t think I called it that then) for a few months on my first blog, a travelogue called “From Flyover Land.”

From Flyover Land was a project I received a yearlong writing fellowship to pursue in 2005, a launch-pad opportunity on my way out the door of graduate school at the University of Missouri’s School of Journalism.

With the money, I bought my first laptop. I bought my road companion, a 1975 Volkswagen bus I named Boiohaemum (“Boio”). And then, leaving my first newspaper job behind after only six months, I hit the blue highways, as writer William Least Heat-Moon called them in his 1982 book of the same name, Blue Highways. 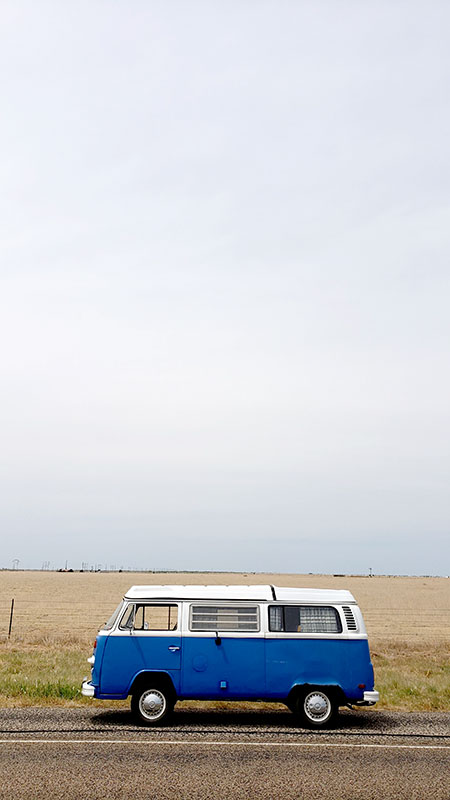 In fact, before I left, I met Heat-Moon at a book signing. I told him what I was going to do, which essentially amounted to following his lead (and John Steinbeck’s, Travels With Charley; with a dash of Jack Kerouac thrown in, no doubt). I can only imagine how many times he’d heard such things. But he encouraged me.

I spent the summer of 2006 driving the interior of the United States, sleeping, writing, living in and talking to Boio. I was there to pay attention to the landscape and the life in parts of the country that get little attention beyond those who live there.

I was there to pay attention to something in myself, too, I suppose. I’d not undertaken such a journey before, never having spent meaningful time alone out in the world like that except for a four-day weekend solo camping at Yosemite National Park in 1999.

Blogs were fairly new then. They didn’t have much credibility at the time, at least not in journalism circles. That I was going to publish a blog about the experience was laughed at by at least one administrator in the journalism school.

Some old-school minds, even in one of the world’s leading journalism programs, hadn’t yet grasped the age that was upon us. Knowing that, I’d proposed From Flyover Land as a book project when applying for the fellowship; the blog was a side foray along the way. An exploration. A space for practice.

In time, I’d go on to shop the book around to publishers and agents. But 35 to 40 rejections in, I gave up. I regret not completing the book, even if for myself and now for my sons, if nothing else. But I digress …

One creative practice I kept up during those months was a series I called, “191 Words On … ” The idea was to give myself constraints that demanded efficiency and precision. To make the limited word count, uh, count.

Here is one of those posts, from a Sunday morning in the summer of 2006 spent in proximity to a President in Plains, Georgia:

I don’t remember armed security personnel guarding the doors at church before. How long since I’ve been here?

At the Maranatha Baptist Church, three men in crew cuts prevent my new friend Chuck and I from sprinting to Jesus. An agent gets friendly, tickling me up and down and reminding me I have yet one more something in one more pocket. “What is that?” he keeps asking. Dude’s nosy.

My palms fill – cell phone, keys, two pens, notebook, tube of chapstick, two flash drives on a lanyard – like a kid who’s won too many carnival trinkets. Another man plays with my cell phone, then turns it off. Another plays with my camera, then gives it back for me to reholster. They don’t say anything about my pinstriped Converse All-Stars.

Outside, a human traffic jam forms. People are having pictures taken with the morning’s Sunday school teacher, Jimmy somebody-or-other and his wife, Rosalynn.

My, how Sunday mornings have changed.

Several months later, I’d learn the value of such writing practice for the first memorable time.

After a stint in northern India, where I’d worked on the From Flyover Land manuscript daily in a hotel room while my now-wife Becca worked on a photography project in a prison there, I returned to the job at the newspaper.

My now-late editor, Dennis Barnidge, would get my first articles since my return, and he’d compliment my work as much as he ever had or would. “You’ve been writing, haven’t you?” Yeah. “I can tell.”

Dennis was right. I had showed up at the newspaper the first time around and, more trained as a photojournalist and magazine writer than a newspaper reporter, and just plain inexperienced, wasn’t very good.

A usually calm and reserved man, he’d once erupted in frustration at my ineptitude — and at my expressed frustration with how heavy-handed he was in editing my work.

“You have no sense of story!” He assured me that until I figured out how to actually write a newspaper story while navigating a solid, useful and compelling arc, I could count on him to correct my work. (I credit Dennis with being the most positively influential editor I’ve ever had; I wish I’d gotten the chance to tell him so.)

From Flyover Land — the blog, specifically the “191 Words On … ” series, and the abandoned manuscript — had taught me to write. Dennis knew it. And with his words, I knew it too.

The value of creative practice.