Words come. Wherever I am. Sometimes I let them in, we sit down together, I listen. I wish I could capture them all. It is amazing, though, how creative work adds up by just letting in these moments.

The poet Carl Sandburg is well-known for his 21-word poem, “Fog.” The story is he was walking through Chicago’s Grant Park on his way to meet someone. With some spare moments and a book of Japanese haiku in-hand, he notes a moment in time. He fits his lyrical way of receiving the world around him into his life on the move.

It sits looking
over harbor and city
on silent haunches
and then moves on.

Maybe I had more time on my hands for the poem that follows. Maybe I let my pen get away from me. But “Waiting” is an example of seizing what’s there and letting it flow before I get in my own way, shut down the flow and, especially with this one, turn away from the vulnerability.

It’s not overworked. Notes as they came, mildly refined. I’m sharing it here and now as a means of embracing the “show your work” ethic. It empowers the feel-good energies of creating and sharing, and denies the self-censoring paralysis of so-called perfection.

Maybe this prose poem will change in future publishing. If you’re seeing it here, you’re on the inside. With me. Comments can be directed to the Humanitou social media pages (@humanitou) on Instagram, Facebook and Twitter. And via email: adam at humanitou.com.

Sitting in the waiting area of the mechanic’s shop, waiting on an oil change, vintage signs of American car classics and greasy-handed manhood highlight the softness of these words falling out my pen, the ॐ etched into my skin, and the holes ripped across the thighs of my jeans, threads dangling by design. 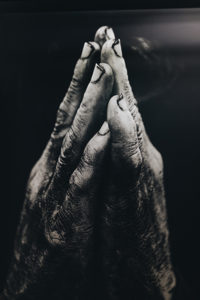 There’s long long been the guilded and the gilded. I squeeze into the box stamped Other, and hope the words continue to fall.

There are skills in my hands I’ve lost the map to, leaving the calluses and fire-forged grips to the men of men that carry forward the history of collars dyed blue and smeared black, stories of America touted by politicians, and buried in graphite-lung mines and times of change.

My fingernails are not stained by oil, dirt, coal or the silence of a day’s exhaustion unspoken. My neck’s tan collects from the freedom of riding winter-draped mountains of joy that rise, a spine of history in this land that breathes west of the ranches where cowboys work through wind chills and what’s-next.

There are skills in my hands never learned, but words pouring out with the pulses that twitch through the grip I put on cylinders of fadable ink, blades of black and blue that bleed onto canvases blank and bound.

The map I’ve lost, damp and unrecognized, is buried. It might never be coaxed into the light. Until never comes, it waits on a change.