The Art of Nikos Pulos

Chickens wander in the garden behind Nikos Pulos and Melanie Audet’s art studio … once a horse barn. Once a mother-in-law cottage. Now a creative haven he and she share.

Nikos shoos the chickens out of the garden. They move to wandering the yard and driveway between the studio and the garage. They move around the Subaru-sponsored SUV wrapped with an image local beer-lovers would recognize in a heartbeat: a laughing yellow Lab, tongue wagging.

Nikos, 42, is a brand manager for Bristol Brewing Company in Colorado Springs. Nikos, Melanie and their two daughters of single-digit ages live in Manitou Springs, not far from downtown. Not far from Manitou Springs High School where he graduated. Not far from Craftwood Inn, which his family once owned. 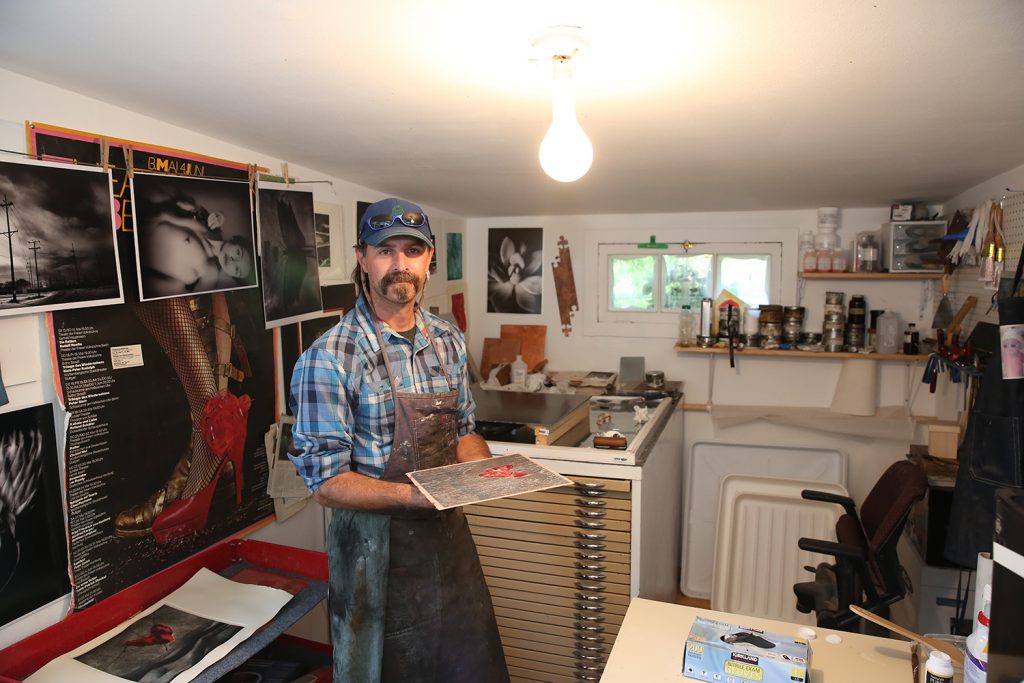 Inside the studio, Melanie’s shibori dyeing work lies on a table on one side of the main room, rolls of white fabric hanging on a nearby wall. Nikos’ equipment is at the front. It’s at the back. It’s in the garage.

Humanitou: How much time do you spend printmaking in your studio?

Nikos: As much as I can. Yeah, the brewery pays the bills, but my passion is in printmaking. I will transition into doing this full-time at some point. But as it stands right now it’s my … my love. I also do photography, and I take photography and translate it into copper photogravure, and from photogravure I print it onto the etching press out there (in the front of the studio).

In that intaglio envelope you’ve got drypoint and true etching, and you’ve got all kinds of facets. All of them fit for me in the same category of being one of the most beautiful art forms. You’re basically sculpting metal to make an image.

So, here’s a proof print of this, which we’ll print in a little bit.

(Nikos shows me a print with a nude woman lying across the bottom quarter of the print, a heart hovering over her, hooks and lines extending from the heart in five directions.) 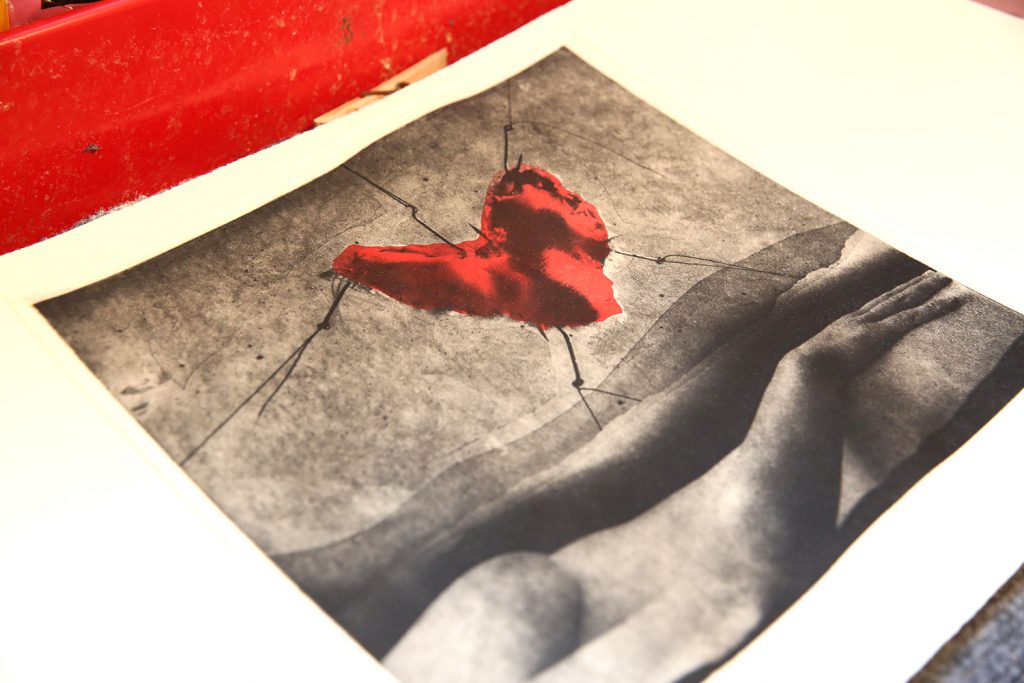 Literally, you’re taking the plate and you’re crushing the paper into a sculpture, and when you pull the paper away, you have your image.

I love this print. I’m curious how long all this takes for one piece, all the steps.

If it’s just a photogravure print, you’re looking at a solid, let’s say, week just to get it etched into the copper.

How long have you been doing this?

Most of my life. Printmaking and photogravure for some reason have been chasing me down. My father studied at MIT for photography. He started doing photogravure, following his vision years ago, and through the course of time I would do it with him.

Then, in high school, I would start printmaking. Then, when I went to college — I went to Western State (in Gunnison) — I basically blew off every other class to live in the printmaking studio.

Then I got an internship, I finished my BFA with master printers in Florence, Italy, and when I got back to the states, I ended up becoming the master printer for the Edward Curtis Collection in Santa Fe. Later, I did a huge contract job for Emi Fukuzawa (sculpture artist) out of Japan.

How did you go from being the master printer for the Edward Curtis Collection to living back here in Manitou and working at Bristol?

The reason I came back to Colorado, I guess it was around the time we sold the restaurant (Craftwood Inn). I’d been in Santa Fe for 18 months to two years. I met my wife during that time.

No, here. At the Mariner.

One thing led to another. I was working at the restaurant and then my family sold it (12+ years ago). Right around that time is when we did the work for Emi Fukuzawa. I needed more money, and so I started bartending part-time at Bristol.

Your project for the Edward Curtis Collection was with your dad, Cris Pulos.

How was that working with your dad? Have you done anything like it since?

It was cool. No, I haven’t. In retrospect, I should have realized what a beautiful thing it was.

And the Emi Fukuzawa project, what was that?

She was extremely well-known for her sculptures all over Japan. They were looking for a way to take her sculptures and do it in a two-dimensional way for a book they were doing. It was a limited edition of 25 prints of 10 plates, each a different photograph of a different sculpture she’d done.

How do you get that kind of commission work, especially from someone across the world?

There’s not a lot of people who do photogravure, true photogravure, copper. There’s a lot of people who do polymer. There’s a whole bunch of different processes, but not many people still do it using copper. There’s maybe 25, 30 major print shops in the United States that still do it. So she sent word out. We threw her a price back and she said, I’m going to fly to the United States and talk about this.

Nikos kept proof prints from his work in printing Edward Curtis’ photographs. He printed from the original copper plates, a rare opportunity.

“Without steel-facing the copper, you can only get so many prints off it before it dies, which is really interesting,” Nikos says. “You develop this really interesting relationship with this piece of metal, and then it has to leave because it can’t do anymore.”

For many, Curtis’ photographs from the early 20th century are instantly recognizable. The reddish-brown sepia color, the Native American subject matter. Portraits. Life. A time gone.

Nikos pulls a stack of prints from storage to let me look, touch, examine.

When looking at the Chief Joseph portrait, Nikos tells the story and illustrates how the chief changed over time. Nikos covers one half of Chief Joseph’s face, and we look at the other half, look him in the eye. Then Nikos switches sides and we look Chief Joseph in the other eye. All while Nikos is saying …

“He changed. You’ve got the compassion when you look at one eye, and if you switch, you’ve got the warrior. Because of the oppression, the cavalry against his people. They actually chased them into Canada and tried to wipe them out.”

We keep looking. I’ve sidetracked our conversation. I ask to see each of his 14 prints before we put them away and continue. Nikos gets it.

“Isn’t photogravure — it’s like pouring liquid velvet on paper,” he says. “You can’t get any sexier.”

The Journey of Passion, Failure + Success

Why this, what is it you love so much now about printmaking?

Everybody has their own drive for things, but printmaking is, in my mind, kind of a reflection of me. Printmaking, it can be delicate, it can be violent, it can be soft.

For me, staring at a copper plate and wanting to crawl inside of that print is one of the most amazing things there is. It gives me goosebumps. There’s nothing prettier about an etching or photogravure.

Is it the depth, the appearance of texture …

It’s all of those things. It’s physical. I mean, to end up with a print, it’s industrial, it’s physical.

And sometimes it doesn’t work. Sometimes you really have to start over, you have to go back to square one.

I can’t imagine putting in those hours–

And having it fail?

It happens all the time.

How do you take that?

Cope. (pause) I think because the drive is so intense for me, it becomes a challenge. That failure becomes something beautiful later on.

How about when you produce one you’re happy with?

It’s a mixed bag, man. Because it means that journey you took to get there is now over.

You are printing projects with an exhibition in mind. 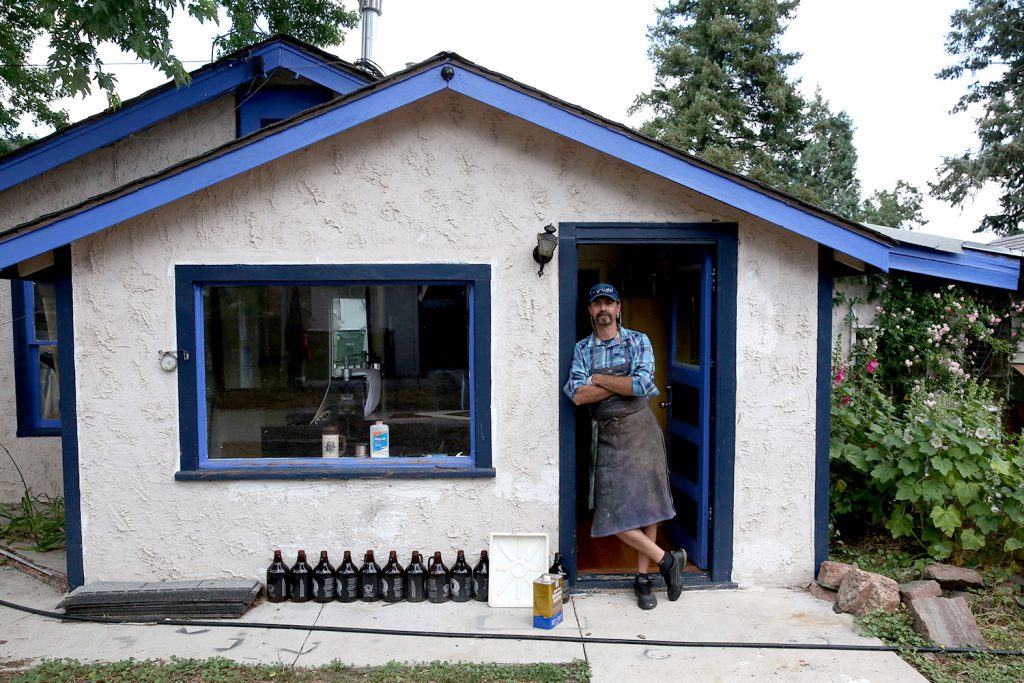 Where is that going to be?

I haven’t chosen a spot yet. Nor have I finished it. As it stands right now this isn’t a full-time job. I can take my time. I can do this for me.

You’re not in a rush. I imagine a lot of people can hardly wait to get their work out, show it, sell it.

Right. I’ll never have to sacrifice my art for money, because I’ve got a job. I don’t have to rush something out the door because the bills are due.

How much does that mean to you?

It means everything. I mean, putting art out into the universe is essentially all the little secrets that you have are going into what you’re doing, your expression. So, it means a ton.

Right now, it’s about the experience. It’s the relationship with the craft. It’s also me getting to know me. It’s that journey. To get to the end result that I want, I have to take my time. I have to be patient, and I also have to be ready to have everybody else experience that, too.