Melanie Audet turns off the rock polisher her young daughters, who now are at school, like to use. “My kids love to collect rocks. They take after their mother, I guess. I don’t know. I always collected a rock from wherever I went, too.”

The noise settles to silence in the home studio — a converted mother-in-law cottage, among other things — she shares with printmaker Nikos Pulos.

Rolls of fabric hang on the wall of Melanie’s half-ish of the cottage. Dyed fabrics spread across a high table. A dress form is clothed in a kimono Melanie has made, an example of her shibori dyeing artwork.

And Melanie talks with Humanitou. She shares how she wound from a fortunate and contained upbringing in the Detroit area — “I was always the weird one” — to a second round of art school in Portland and, ultimately, how Manitou grabbed her to stay.

She remembers stumbling onto her life of weaving and fiber arts, and shines light on the spiritual call of creativity. Melanie, 43, also is one of the organizing members of Textiles West in Manitou Springs. 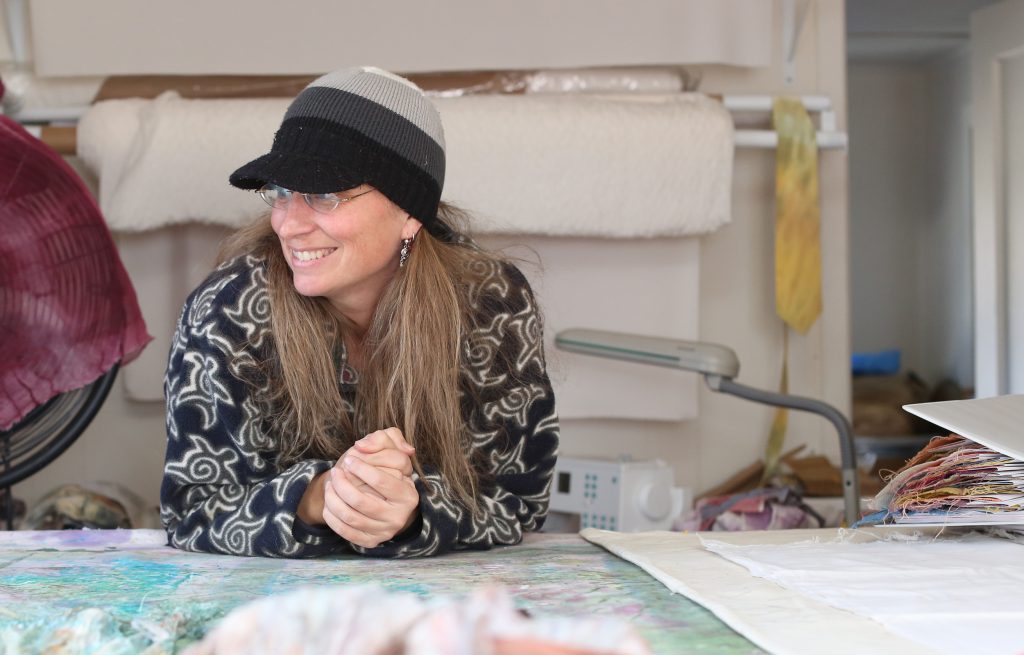 Humanitou: How did you come to weaving and shibori dyeing?

Melanie: I don’t really know. I just kind of fell into it. I went (to Portland) to study fabric. I found a great school. I was in the last year of college, freaking out, “What am I going to do?!” (laughs) I was in photography at the time.

I just started to get into textiles. I took a weaving class and grabbed onto this idea that I wanted to be a weaver.

Humanitou: You’ve been involved in Manitou for quite a while, working, living, creating. When did you come to Manitou?

Melanie: 1999. I was 25. I actually had a job in Chimayo, New Mexico. (laughs) That was interesting. Chimayo is this tiny town and there was this weaving studio–

So, we went to this weaving studio and I was looking at all these beautiful weavings and I said, “This is what I want to do.”

After school, I got a job with them. I called them up and they said, “It’s funny you called, because we need somebody to come down and work for us.”

Humanitou: So, how long were you working there, living there?

Melanie: (laughs) I didn’t work there or live there, because I went down there. It was, like, $6.50 an hour, and when I went down there she was, like, “Be careful who you move in next to, because there’s a lot of heroine dealers in Chimayo. We just got funding so we can fight them.”

I’m a panicker. And I was doing this long road trip and I came to Colorado, and my best friend’s family was here and they were like, “Just move here. You’ll be fine.” 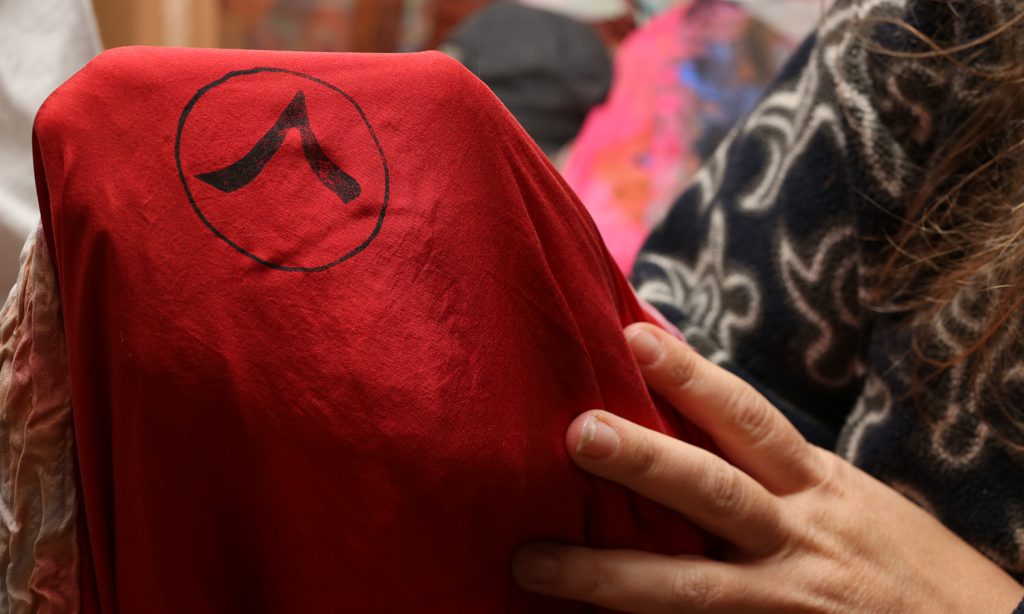 Humanitou: That was almost 20 years ago–

Melanie: (laughs) And I was only going to stay here for five.

Humanitou: How did you choose that end point on the calendar?

Melanie: Because, when I left Detroit, I wanted to see everything. I wanted to see it all and experience it all. But, I guess, in my nature, I’m not that much of a gypsy.

Humanitou: It seems there often is a difference between the idea of a traveling life, and the reality of not having a rooted place to return to.

Melanie: I collect a lot of sayings. And that was one Carl Jung had said. He said the artist is torn because they want this secure life but they have this driving passion that they have to do the art, there’s no choice, they have to do it. They kind of wrestle with that, and the two chafe against each other. He says it in a way better way than I’m saying it right now.

Humanitou: We’re talking about 20 years ago when you had that realization that pointed you to weaving and fiber art. That moment–

Melanie: Defined my life. It set my whole life in motion. But it’s not like I never wavered from it. I studied nutrition and I worked at a food bank, but I was still helping people. It was this kind of spiritual call, instead of taking the creative path, which I consider a spiritual call. Call me weird, that’s fine. It’s a spiritual call. Not everyone can do it.

I don’t think [art] is a natural-born gift. I think anyone can learn to do it. It’s easier for some to do it, and some have to work harder. But that’s just how it is for everybody. Some people run, it’s their natural-born gift, but it doesn’t mean you can’t do it if [it’s not natural-born talent]. I run, and I’m a horrible runner, but I still run.

Humanitou: I think it’s been a lifelong thing for me to see that, coming from a rural, small-town, Midwestern place where there wasn’t a lot for artists or the acceptance of “weird.”

Melanie: But you had a calling.

Humanitou: Those are things that, looking back, I now realize always were there but I had no environment to cultivate that. I wasn’t comfortable with being weird in that place and time. There was nobody who dyed their hair, who was extraordinary in how they dressed or their flare or their style in life. Like, “Whatever creativity you have, keep it contained.”

Melanie: Yes. Contained. I did an art piece about that, actually, in school. We had to do a journal piece, and we had to do a piece everyday. I made this bowl, and you had to be contained in this bowl. I was making these shapes that couldn’t fit in the bowl.

I knocked on the door and I said, “I’m in town just for a little bit. Can I come in and take a look?” So, I’m talking to this woman, she’s a cleaning woman. It’s this house that’s on this lake.

We were looking out the window and she said, “I don’t mean to sound weird, but it just seems when you look out on the lake, it’s really good for your soul.”

I looked at her and said, “That is not weird. I am an artist. That is what I live for.”

But I thought it was a strange comment that she had to, like, disclaim that’s weird. It’s not weird. That’s what people are seeking, this calmness for the soul, this soul … food, something to feed them.

When you’re looking for more but you’re forced to be contained, it’s hard. 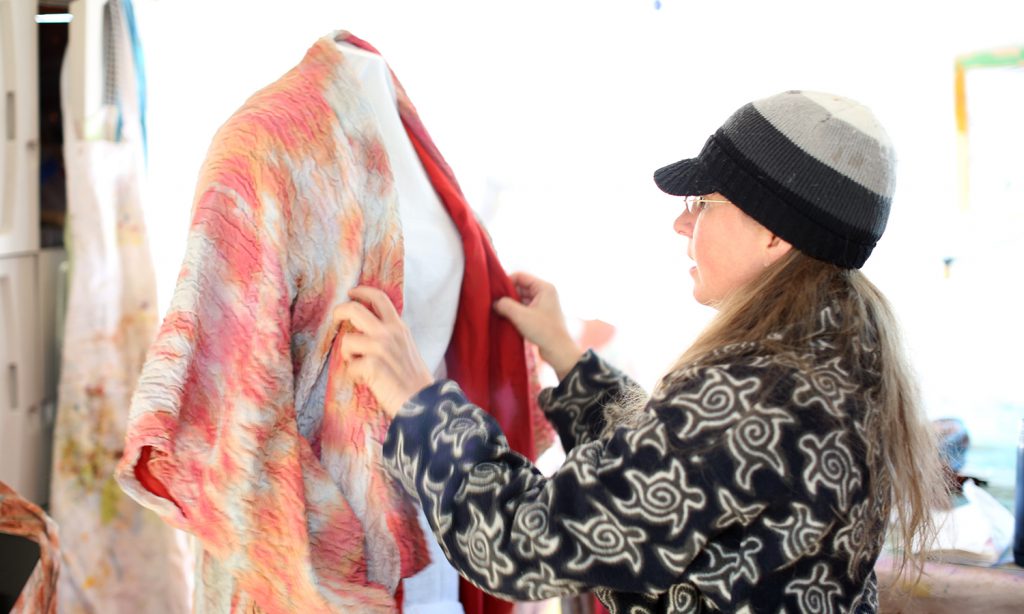 Humanitou: Creativity as spiritual call? I don’t see that as weird at all, by the way.

Melanie: I see it as a spiritual path. I was raised Catholic. My parents are French Canadian and they come from Quebec, and they come from small towns that were very Catholic. In fact, if you go back to my ancestors, you had to be Catholic even to get to the New World. So, being Catholic was a big, prevalent thing in my family’s life.

For me, being spiritual was there all the time. I was raised with it, and I consider myself Catholic, even though I don’t go to church. I have some issues with certain things, but that’s another story for another time.

It’s just something that’s always there. I consider creativity to be a voice of it, to be spiritual.

Humanitou: And that runs through everything you’ve done, simply by running through you, then?

Humanitou: You are part of Textiles West, which has been in Manitou for more than a year, and in the Manitou Art Center (MAC) since July. What is that? What is your role?

Melanie: It’s a dream that came true, basically. It’s an arts organization focused on textiles whose main goal is to educate the public about textiles. Our goal — well, I think the goal is, I don’t know if the other women agree — is to be a nationally known textile center.

We try to educate people about textiles, because it’s one of those arts that is a foundational art, like ceramics has been around forever. People have been wearing clothes for however long, all the way back to the loin cloth.

It’s been around forever, but it’s definitely something that is taken for granted, because you can go to Wal-Mart and buy a T-shirt for three bucks. People don’t realize what it actually took to make that three-dollar T-shirt. 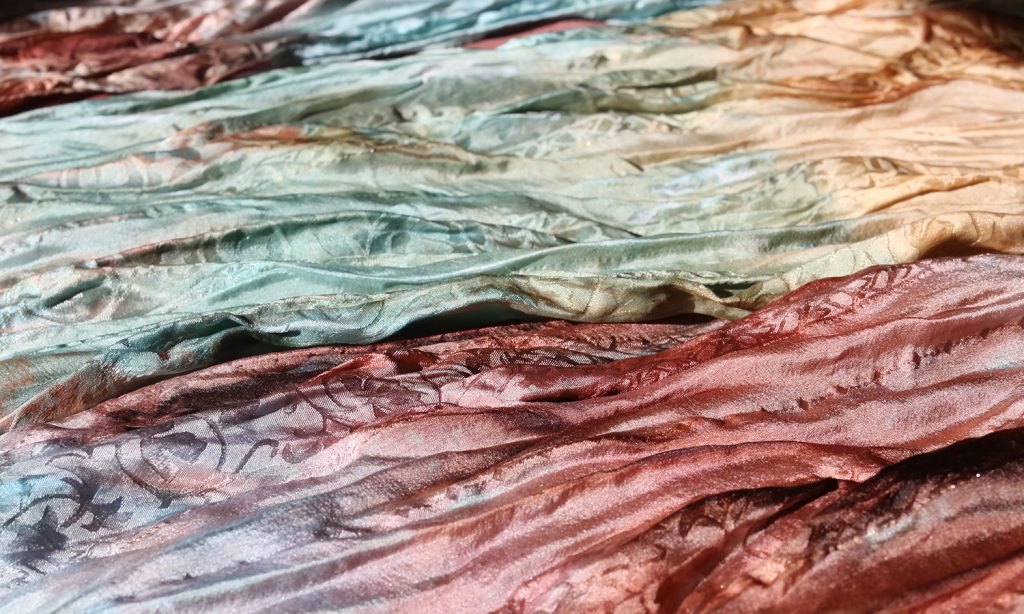 Humanitou: The Textiles West space that is located in the MAC, is that for members to use to make their art or is it for educational events for the public or … ?

Melanie: It’s both. The primary function of that space in the MAC is to offer a space for people who weave or know how to dye but don’t have the space. You can join as a member to use the space. You have to be certified to be able to actually use the space, either by taking a beginning class or being certified through us.

The idea, too, is to bring in nationally known artists to give workshops so people will come from all over the nation — that’s the goal, eventually — come and stay in Manitou.

Humanitou: Are you still weaving or do you focus on shibori dyeing now? Are you able to focus much time on your art? Are you selling it?

Melanie: Shibori is more the selling stuff and my weaving, which I haven’t done in a long time and totally miss, is my hobby … I guess.

Weaving takes a really long time. To warp a loom takes forever. I just don’t have that time. And once I get focused on something, I need to get it done. It stresses me out, if I don’t get it done.

Humanitou: Where do you sell your shibori art?

Humanitou: With your shibori, are we talking about fabric to hang on walls or are they functional pieces?

Melanie: They are functional pieces. I make the fabric, and then I make it into something. I try different products to see what sells. Scarves, I’ve done sheets.

Humanitou: There are obviously financial benefits to making what sells, but you’re not sacrificing what you want to make?

Melanie: No. When it comes down to it, I just love doing it. It’s the process.

Humanitou: You share this cottage studio with your husband, Nikos. Wait … I just went blank. Are you two married, is “husband” right? 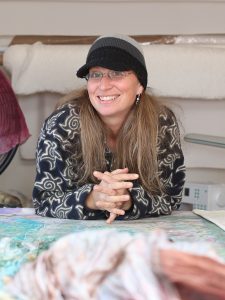 Yes. We didn’t have a ceremony in a church. We got Rodney Wood (a longtime artist and former director of the MAC)– You know in the back of Rolling Stone magazine, “Become a minister”?

I forget what the denomination was, but we got Rodney ministerized. He is a very strong artist and I couldn’t imagine being married by anyone else but an artist. I asked him, “Will you marry us if we get you this minister’s license?”

Is it legal? I don’t know. But we’re married.