From the #showyourwork and #creativeprocess files …

In my daily visual creative practice using the Procreate app on iPad, I’ve been exploring the simplicities of abstract line drawing. A lot of portraits. With blue eyes as the essential (and most obvious) thread that ties them all together. I’m exploring something there, it seems, with sight, perspective, perception …

And then a random “love” popped into my head. So I wrote it. And then I added the “bleeding” pools of color like what I’ve been doing with the blue eyes in those abstract line portraits. 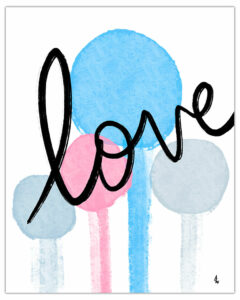 Starting with the blue one. Then the pink, which also has appeared as a soft highlight in a number of the portraits. And then the two grayish-blueish ones, which is another color from my sparse palette of late. All four at different heights.

Letting the flow flow, I didn’t overthink the actions. So I think I thought I was simply working with composition and more of, what seem to me to be, surface-level matters of rounding out the simple visual. Adding texture, color and shape to be backup singers to the “love” I’d written.

And when all was done, I recognized two things:

As someone who could be categorized as overly analytical in so much that I do, it’s a practice in itself for me to let go, to just let the flow flow and not try to think my way to every outcome.

Creativity often is described by artists — and spiritual practitioners — as an energy flow from within, something unconscious, divine, gifted by the gods. Some recognize it as inherent in all of us, and that those who use that energy and create, and those we often deem as “artists,” are those who have figured out how to get out of its way and just let it flow.

THE SHOP | HUMANITOU PODCAST | ABOUT ADAM