Hoop Dreams: At The Rim (XXI)

I still have basketball dreams.

I’m saying that, at night, in my sleep, I still occasionally dream that I’m playing basketball. I grew up playing. Obsessively focused on shooting shooting shooting, rebounding, dribbling, running the court … competing.

I always was — still am, largely — a quiet person who was willing to be in his own space and not feel the need to be the look-at-me alpha in the room. On the basketball court, though, I found a voice and a joy. I loved to outplay the other player, the other team. I was good.

It was a physical outlet, too. I wasn’t one to get into fights as a kid. I usually thought too much for that, and I would resort to trying to make sense of things and talking through it, rather than rushing into the moment with red face and white knuckles. 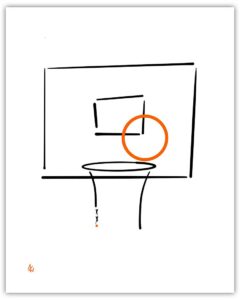 When playing basketball, however, I got to feel that kind of physical exchange. It was permitted, expected, needed. I loved banging around for position on the block and competing for ownership of the ball. Loved rebounding.

And I loved the exertion and sweat and, from time to time, the blood. I’ve got scars on my head, and memories of stitches, from others’ elbows. Somebody out there is walking around with a chipped tooth from my elbow. Part of the game.

I was proudly tough as a player. I was reliable for teammates, leading by example, if not a loud voice. Gritty and willing to mix it up, I wanted a physically demanding game in which the rules were applied gently. You play through my fouls, I’ll play through yours. No ticky-tack stuff that slows the flow and leads to the best players sitting on the benches.

I also was talented enough, if not as talented as I wished I could be. Tall enough, if not as tall as I would like to have been. My dad once said I willed myself to my height, as it was: 6’2”. (Or 6’ 3 ½” if you take the friendly old doctor’s word who filled out my athletics physical form my senior year. To give me a boost. Game programs listed me at 6’3” or 6’4” all year long.)

And I willed my way to playing at and occasionally above the rim. So badly I wanted to dunk, to feel and grab the iron as I stuffed the ball through. So I did.

TO THE PAST & THE FUTURE

I played on teams starting in the fifth grade. Though I was cut my eighth grade year (the coach later apologized for that after I went to a basketball competition and outperformed my friends who had made the team).

And I was discouraged by the junior varsity coach from continuing after my experience with him in the summer league when I was a freshman; I was smaller then and he wouldn’t play me, even in summer league.

A friend persuaded me to give it another go in tenth grade; new coach. I did. And I was a starter and leader on the team the next three years.

I played in college. And I played in the Army … this introverted guy who always was so easy to overlook, because he wasn’t loud enough for the limelight, but was hard to overlook when he stepped onto the basketball court.

I played in a charity basketball game against a group of San Francisco 49ers, more than 20 years ago when I was in the Army. I got to start opposite a childhood hero, Stephone Paige, wide receiver for the Kansas City Chiefs in the 80s and early 90s. (Though never a 49er, Stephone played with them to help the cause.) And then I (incidentally) busted a 49ers running back in the mouth with an elbow along the way. (Oh, so oops. Huge, muscled and suddenly annoyed dude.)

Now those days are long behind me. I feel it in my body, and in the fading memories. And in how when I dream I’m playing basketball, it often includes fantastic flying scenes, in which I can rise to dunk from near half-court by pumping my legs over and again, like a jellyfish drawing in and thrusting out its tentacles as it glides through the water.

And now I have two young sons. I get to shoot with them, and teach them things they want to learn. And we play games of H-O-R-S-E in which I have to make shots twice in a row to their one, and sometimes they team up against me as well, like playing best-ball in golf. And I look forward to a day when they can best me in all the ways, because I know it’s on its way and I want to see it.

The XXI in this drawing (the orange dot being a stand-in for the capital-I) speaks to something about the me of now, the contemporary me, the old-timer baller (has been?). It says something about me as the mostly dreamer dad I’ve become in the 21st century, in which the best ball I play now is in my dreams at night.

The number 21 also was worn by a childhood friend and former teammate I’ve known for 40+ years, and the only one from my childhood I still occasionally talk with, though we live across the country from each other.

I don’t think about the “old days” of playing basketball without thinking of him being there with me, my teammate in one uniform or another, starting when we were 10 years old. I picture him sliding an assist my way or tossing me a lob. Or my hitting him with an outlet pass for a fastbreak or a kick-out for him to put up a three-pointer.

To be sure, there are many experiences in life that I don’t remember the last time I experienced them. Like, the last time I played catch with my dad in the backyard. Moments lost to the dustbin of forgotten memories.

But I do remember when my childhood friend and I last played basketball. He lived near where I was in graduate school for photojournalism, going on 20 years ago now. I used to play a weekly pickup game on campus with journalism classmates. He joined us once, right before he packed up his family and moved to L.A., and before I graduated and moved on with my adventures.

We knew that was it, the last time. I made sure we got to be on the same team, so we could make our last plays and passes together, win together. I’d have hated to send him out with an elbow.

So … like my other line drawings — e.g. “Simplicity (Guitar)” and “Chopsticks (간단)” — “At The Rim (XXI)” is simple-looking for sure. Yet it’s loaded with meaning and stories to me. Past and future.

Prints available in the shop.