The U.S. flag is a loaded symbol. We — and I mean when taking into account the views of a truly collective, diverse “we” — can see all things in it: pride and shame, peace and violence, protection and destruction, opportunity and greed, freedom and imprisonment … on and on.

Many of the rah-rah, “USA #1,” self-described patriots who define themselves by this flag often enough are ones who, I suspect, do not recognize the fullness of it, its story, its layers and contradictory truths. The hypocrisies in which they (though not only they) take part. Sometimes loudly.

The flag everyone faces and, in one form or another, salutes when standing for the playing of the national anthem at ballgames, is the same one everyone ignores when watching those games at home, where there’s no social pressure to hold them to the act instead of going to the kitchen to grab another beer from the fridge before the game begins.

The same flag that protesters have burned as a first-amendment expression of free speech against the government draws the searing hatred of the aforementioned self-described patriots who, when called upon to properly dispose of a worn and torn flag will … burn it.

I learned a bit about the United States flag when I was a soldier more than 20 years ago. … In the years since, I’ve learned that the glossy stories about how the U.S. flag flies for all of us really are just stories. Whitewashed.

The flag that flies over American government buildings, such as the U.S. Capitol in Washington, D.C., ironically is the one that symbolizes those self-described patriots’ freedoms to assemble in protest …

until they violently riot, and pull it down and replace it with the flag of their dear leader, a demagogue who two months prior was freely and fairly defeated by fellow American voters, and they attempt to overturn those fellow voters’ freedoms of voice which are equally guaranteed under that red, white and blue symbol.

I learned a bit about the United States flag when I was a soldier more than 20 years ago. I learned it is to be cared for, not flown when tattered and torn, not left out in the rain. I learned it is not to be flown under darkness unless properly lit through the night.

I learned it’s not to touch the ground … or one’s pickup truck or boat. I learned that when the flag is hung upside down, it signals grave danger and distress. And I learned the United States Flag Code dictates these and many more rules of proper conduct with the flag.

In the years since, I’ve learned that the glossy stories about how the U.S. flag flies for all of us — not just the white and the self-entitled angry, the fundamentally fearful and the ignorant — really are just stories. Whitewashed.

(Not sure what I’m referring to? Listen to the voices of these tremendous guests who have shared their insights on the Humanitou Podcast: Gregg Deal, Sara Meghdari, Chip Thomas, Ber-Henda Williams, Dáreece Walker, Virgil Ortiz. And then keep being curious; the information is out there.)

And so what has sprung from those roots predictably is nothing less despicable. The lands are still stolen. Black, indigenous, people of color and immigrants are still dying at the hands of the state without cause, and the murderers are still walking away insufficiently or wholly unpunished. Otherism and violence in the name of this flag is still in full effect. 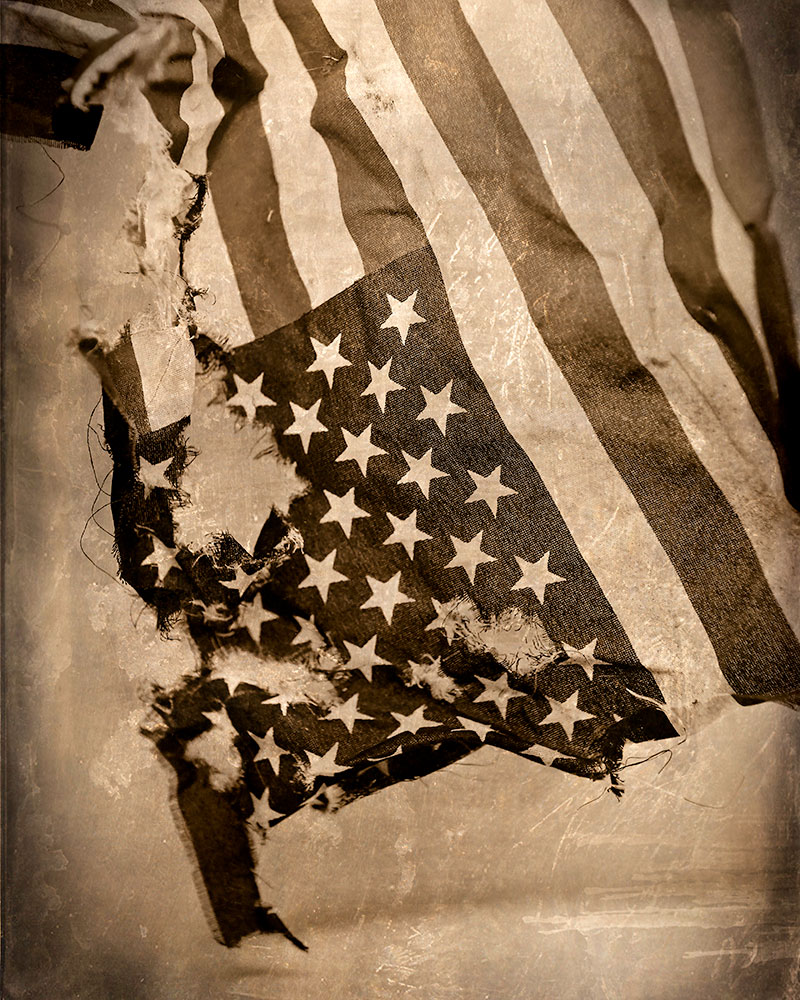 The “supremely” white and the angry and the arrogantly ignorant reject those facts while simultaneously proving the truth of them with their words and actions.

Take for example, how Martin Luther King, Jr., led peaceful protests, but was silenced by a bullet because of it, in 1968; and a newly sworn (white) congresswoman just last week participated in calling for a violent overthrow of the U.S. government she’s now part of, then …

this week, in spectacle, wore a mask with the word “censored” lettered on it while speaking into a microphone on the floor of the U.S. House of Representatives, one of the most powerful platforms in the world, her words being broadcast globally and being documented for posterity.

Tone-deaf hypocrisy in the name of the American flag.

Those sorts of so-called patriots continue to wave the same flag that signifies horror to many across the U.S. and the world in blind rage at what they believe they are being deprived of and are most entitled to …

even as some of them last week stormed the U.S. Capitol, beat police officers and killed one of them, in search of taking hostage and assassinating some of the nation’s elected leaders — with assistance from some of those “leaders” like the congresswoman mentioned above! — and then simply leave again, as if there would/could/should be no consequences!

And they consider themselves the truest of patriots and Americans, and maybe the only worthy keepers of the Stars and Stripes. While I consider a patriot, if we must use that word, to be someone who recognizes our shared potential and responsibility for each other, and embraces the good and right actions necessary to rise to it together. Not someone who tries to hold us back from it.

With all that context in mind: The photograph above, which I’ve straightforwardly named “U.S. Flag (Distressed),” is part of a photographic series, UnReverence, in which each item shown is something human-made that I found left in nature.

Surely no item I’ve photographed as part of UnReverence carries the weight of the flag, its symbolism, its ability to stoke fires and evoke opposing perspectives, to conjure pride and disgust.

I found the flag in the torn, frayed, crumpled condition that you see it in the photograph. I found it in the woods adjacent to a cemetery. Something presumably placed on a veteran’s grave out of respect on, say, Veterans Day. And then left to the elements, to the winds, to the wild of the woods.