Perception/King: As You See It

I am fascinated by others’ processes of work, thought and creating. I like to see photos and hear/read stories that give peeks behind the curtain of what they do. I think that’s why I’m drawn to share some of those pieces of myself.

So here’s another entry for the #creativeprocess and #showyourwork files …

I’ve been working on a new abstract series, a new idea I’m feeling out. I’m calling it “Perception/King.”

Leading up to this series, I’d been making visual artwork that incorporates eyes and the ideas of vision, perspective, ways of seeing and understanding. Perception.

With Perception/King, the thread runs even deeper than in those previous works (e.g. the Blue Eyes and Brown Eyes series), and the eyes are more prominent.

Before I go further, though, I want to mention some artists (maybe many) do not like to get into the details of their thought processes, to reveal too much of what’s behind any given artwork rather than let the viewer/reader interpret — or perceive — for themselves, to see the work through their own unique filters.

While I’m pro-sharing, and I definitely appreciate the curiosity of viewers, like me with others’ work, to want to know how and why things come to be, I also understand not wanting to push you to see the work how I did when I made it, or how I do today. (My perception of the works changes over time, and with new understandings of myself and world, too.

So … how about we pause here to look at some of these Perception/King pieces before I go on with any of my thoughts. The “perception” aspect in the eye, I think is obvious enough, especially given the title. (Plus I already mentioned that part.)

What else do you see? What do you feel? How do you take in and perceive the visual work with the spare title of Perception/King? 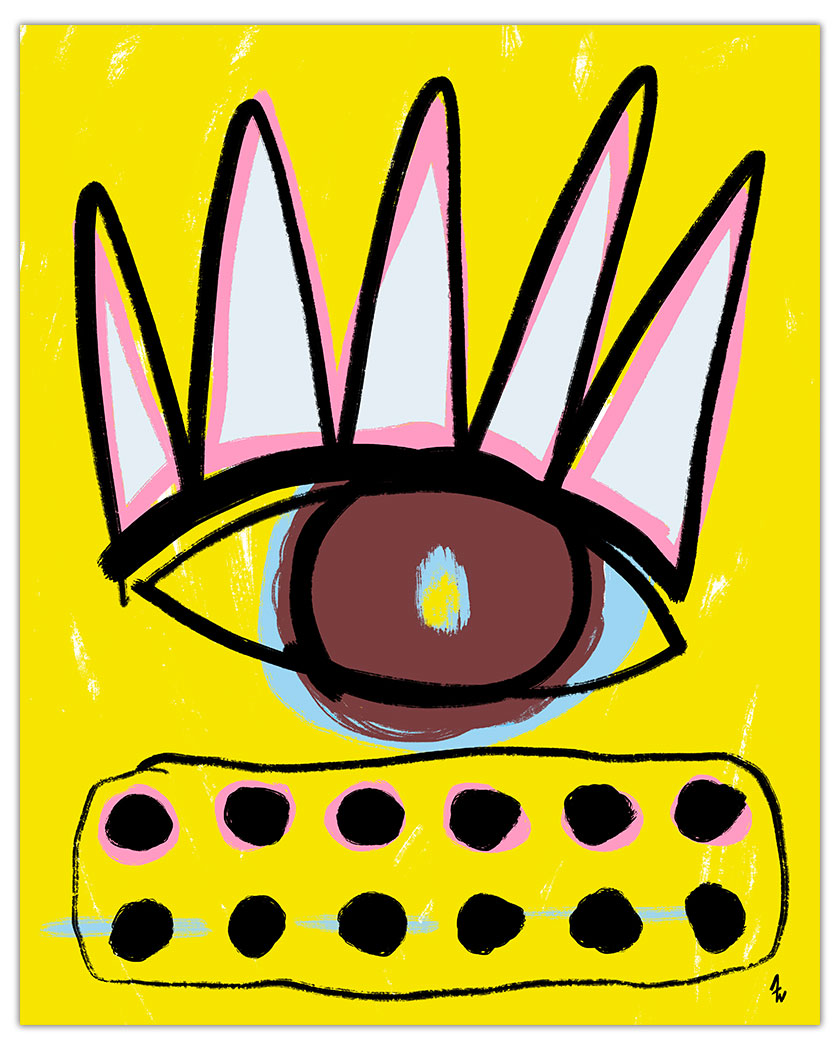 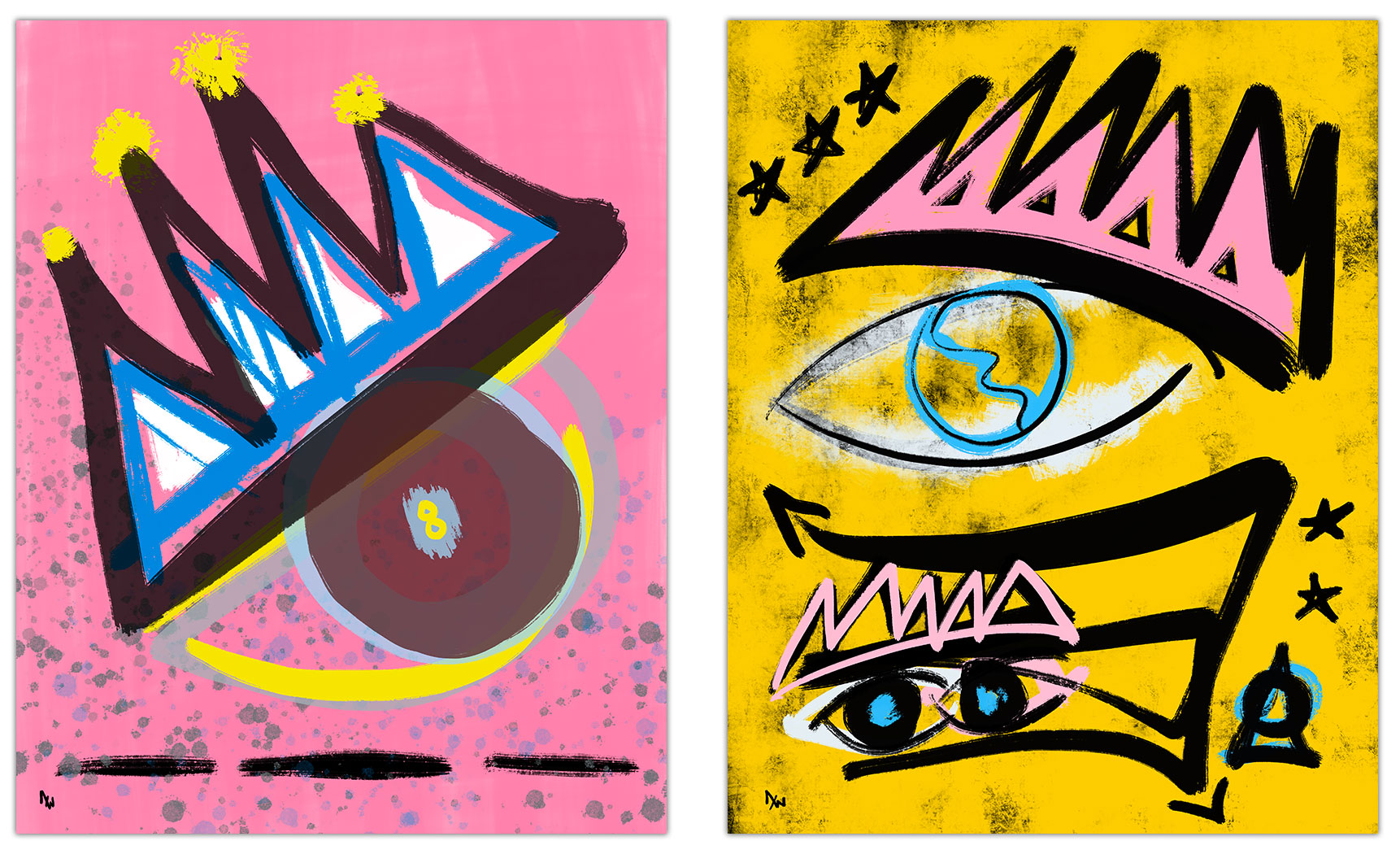 I had a conversation with my wife, Becca, last night about this emerging series of work and the title I’m using. I only showed her the first image initially: Perception/King I.

She saw the eye, of course. She saw the triangular lines above the eye as representing eyelashes.

Yes, my intention was to represent eyelashes, giving further clarifying context for the eye. And a crown. Mountain-ridge zig-zag angles that pull duty on multiple fronts.

Becca also saw the geometrics at the bottom as possibly a Lego brick. We have two young sons, and Legos abound in our house. She also saw that bottom piece as reminiscent of a Band-Aid.

I now can throw in, as of this morning, seeing it as a bird’s-eye view of a carton of eggs. But that had nothing to do with the creation. At least I don’t think it did. Who knows? Maybe I made eggs for breakfast that morning and the visual of the open egg carton lodged in my unconscious mind.

That’s the thing. A lot of creative work — I think many would say the best of it — comes from an inner landscape of the artist that is lit up by divine, higher consciousness, laid there by the Muse and called forth at the moment. The artist then is the vehicle, the conduit, not the true generator or creator of the idea or gifts. (Artist Robyn Sean Peterson shares his experience of this so eloquently.)

I believe in that. I believe it’s there and our greatest work as that vehicle often is to get out of the way of it, to let the light of the gods shine through. (I believe it. But I still struggle near-constantly with getting out of the way.)

I also think that understanding of the creative process as one of mystical connection with divine consciousness perpetuates fantastic notions that artists are something mysterious and strange. They are not.

We could dive deeper there but at risk of slipping into a digression I might not return from. That can be a thread I pull another day. Suffice it to say, we all carry that divine light, with gifts and potential that want to come out. (See Julia Cameron’s The Artist’s Way and Steven Pressfield’s The War of Art.)

But why I mention that here at all is for this reason: I think that story that sensationalizes and pedastalizes artists is why some of them are hesitant to share their process and what any given piece of work means, what they meant by it, why they  made it, etc.

Some know the story is true, and they don’t necessarily know how to convey that to people who aren’t connected with that feeling and flow themselves. And maybe some don’t want to convey it, or to even accept its truth.

Sometimes it feels better to believe we alone deserve the credit, to think that we alone have created, built or earned the moment, rather than see ourselves as privileged, gifted and merely recipients, conduits. Even when what we’re receiving is otherworldly creative energy shining through us from the Muse, the Goddess. 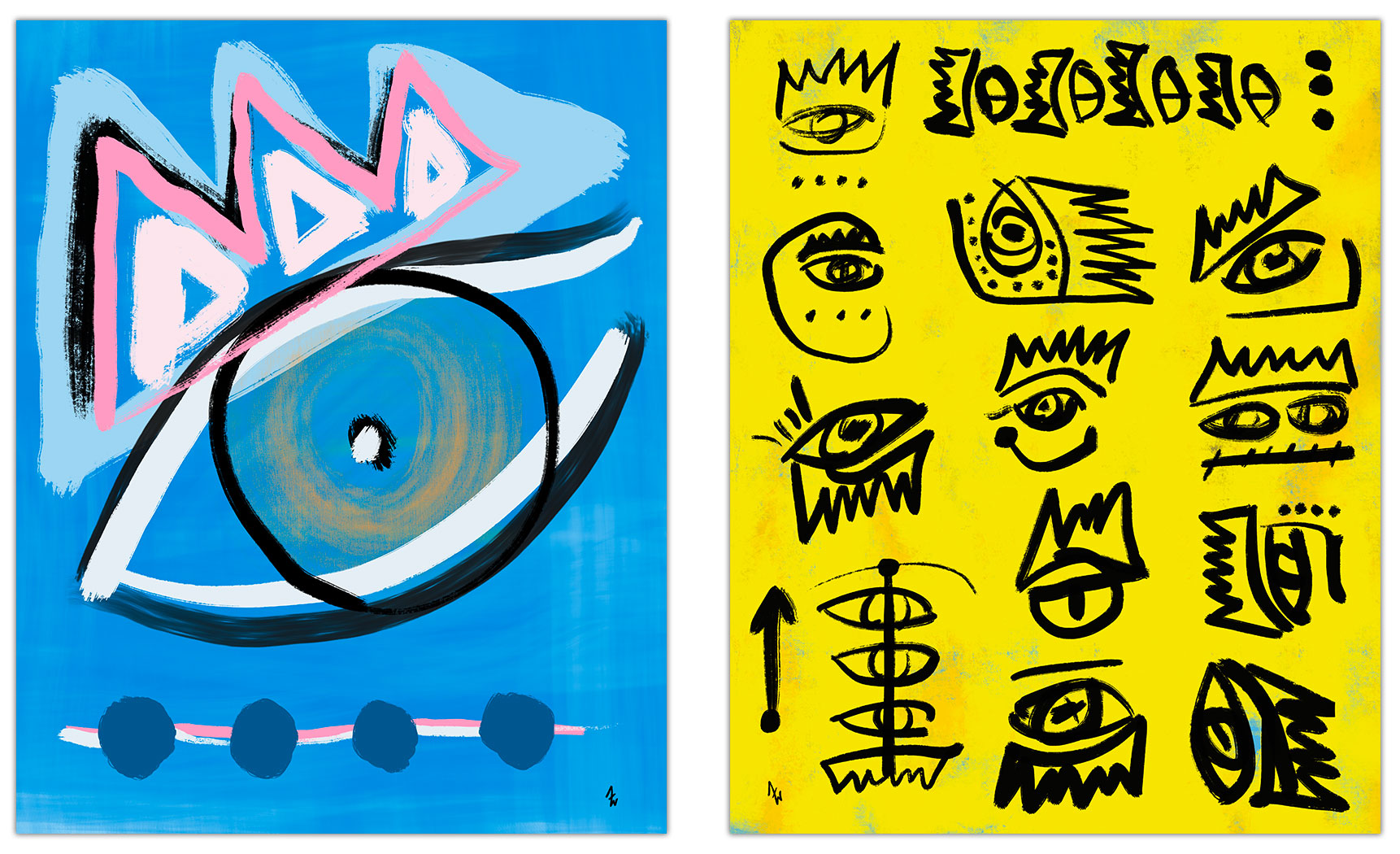 In this new abstract series, Perception/King, I intentionally am using the slash mark rather than saying perception is king. I’m pulling back at that edge, and allowing for your perception to plug in what this pairing of perception and king, eye and crown of lashes might mean. What it means to you is all that matters, not what it meant to me when I created it.

For example, my 10-year-old son saw Perception/King I, the same piece Becca saw, and gave this unsolicited response: “Spongebob Squarepants. (pause) I don’t know why. That’s what came to mind.” And so it is.

Worth noting: To me King, in this instance, represents the power of our perception to influence our hearts and minds. And that fuels our thoughts, words and actions, our interactions and relationships. Spiritually, politically, socially. In every way.

Also: This rank of king, to me, is not male. It simply is giving name to this powerful authority. The history of the language and the use of it — kings are men, queens are women — has no bearing on this work. At least not in my perception.

And that’s what counts: perception. I get to say my use of the word with this work is not gendered, because that is my intention, that is my truth. I assert that as creator of this work. Or as the conduit for it, I should say. And you get to read the work how you feel it, how you are perceiving it. You too are conduit.

Over time, both our perceptions will shift, morph and flow, maybe even flip and or flop. That’s part of the gift of art, too, its power to influence how we see not only the work but ourselves and the world.

And what we do with that perception.