Oneness vs. Sameness, and What I Think I Think I Know (new art, too)

My work tends not to be overtly political. I say “overtly” because it’s said, and I think it seems reasonable to say, that everything is political. Every expression of ourselves is read as something in the mind of someone else. Maybe now more than ever.

Our clothes, our words, our cars, our books (or lack of books), our TV shows, our media sources. Even our groceries. Let alone our actual voices as shared wherever and however we share them in the world. For me, that’s most publicly as a podcaster. Maybe less forward but just as accessible is in my writing and artwork, which most often these days is shared on this website.

More often than not in my work, I focus on the humanness within each of us and how we connect through that. I have political leanings, for sure, but I’m not one for presumptions of certainty in what I know, so mostly I keep them quiet. I’m in perpetual learning mode. I value the emotional and intellectual maturity that comes with knowing, in some sense, what we don’t know. Which is to say, at the least, recognizing that there is much we don’t know.

We live in a time of astounding ignorance, and absoluteness in it, of “knowing” without knowing (Listen to my Looking Upstream convo with Mike Orrill). And while in some ways that has further made clear to me where my leanings lie, it also highlights for me in this age of disinformation that healthy skepticism is as necessary as ever. Emphasis on healthy. 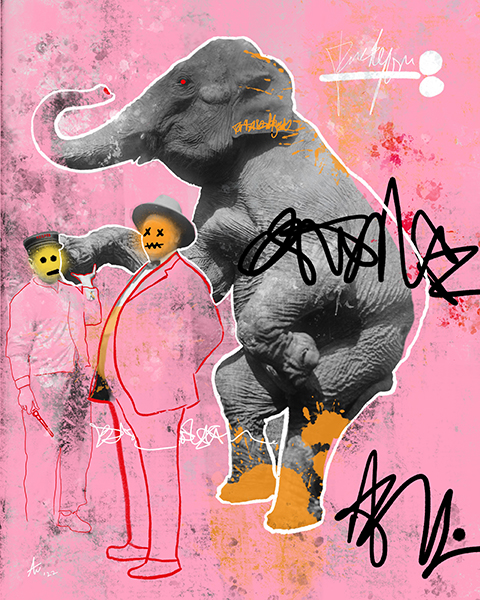 Yes, news sources are as malformed and biased as ever. But the extreme of this we are experiencing now and in recent years also serves as a wakeup to me: “What did we ever really know anyway? Who was providing us information that ever really was free from the influences of power, finance and ego?”

Were the three networks in the pre-Internet and pre-cable era truly honest, or did they simply own such amassed power that our collective belief in them standardized our thinking, thereby amounting to “truth”?

Weren’t Brokaw, Cronkite and Murrow just as fallible beings as anyone else before or since their eras of prominence? Were they not governed by corporate and financial powers, ego and greed just as those we so readily worship or disdain for their positions of influence among the governing and media tribes today?

We’ve all been drinking the Kool-Aid, as they say. (That really is a gross expression, isn’t it? Given its origin? And yet might be a propos in this instance, too.) We’ve just been gulping different flavors of it, and telling ourselves and our comrades that it’s the other flavor that’s wrong.

That’s not to equivocate, bothsides or whatabout this. It’s extremely clear to me that one “side” of this political experience holds greater moral deficiency than the other right now. But it’s all the height of human foolishness.

It all feeds into itself and furthers the damage to our relations as fellow humans. Forget the geopolitical borders and the illusions of philosophical divides: We are one.

We are one. How political of me? So inclusive and optimistic. Only a liberal, that is an open and learning being, could think such a thing, a thing that makes those of the “opposing” belief system laugh and fall back on the intellectually, emotionally and spiritually stunted view (and name calling) that somehow tribal fragmentation rooted in absolute and alternate realities is the way forward.

That is: self-interested greed, disconnection to the point we all stand as 8 billion separate souls on this planet, everyone for themselves, in perpetual so-called culture war.

The deep irony is that what’s sought in that way of being is oneness, sameness, voiceless alikeness. Only those who believe exactly as I believe, know exactly as I know, look exactly as I look, etc., are qualified to be in this club of exclusionary beliefs, including the idea that “we are one” is weak, hippie love-and-peace bullshit. Inclusive oneness is bullshit while ironic, absolute sameness is the truth? The blurry lines we go out of our way to draw, adhere to and enforce.

The abundant hypocrisies of politics and our fallible beliefs are stunning and, if we only can take a breath and step back to see it, humorous – and healable.

Yes, everything and everyone is political. I am political, even when I try to be congenial and keep my rants to myself. And my art, by the nature that it is an expression of how I feel and process this human-centric, egoic world, even when it’s not a more overt expression such as the piece I’m showing in this blog post, is in fact political AF.

The podcasts I shape as host, writer, photographer and more, are tied to the beliefs that we are all connected. They are tied to the beliefs that humans have common ground and that we can cut through the bullshit of hypocritical political tribalism. That we can shine light on inclusion and equity, rather than wallow in the absolutes of head-in-sand ignorance, fear and distrust.

My tendency not to be overtly political, not to use my voice with certainty, has meant my voice (and my work) probably has been overlooked more often than not. While the sensitivity with which I feel the world and take it in so that I can thoughtfully respond to it means I also feel criticism more deeply, I have a theory that I will not have succeeded as a creator and communicator until I have drawn the ire and fire of critics.

In some measure, that’s how we know we are pushing buttons that, hopefully, stir reflection and shine light in a meaningful way. I have no interest in being a troll or drawing attention for the sake of attention, especially not in this hurting, harming, reactive environment of humanity.

I have no interest in pushing buttons just to rile people and draw hate to draw hate. I have no interest in casting hate, either. We’re drowning in that level of thoughtless, emotionally reactive noise. Those people need love and an empathetic listener. I’m a good listener (podcast!), and I’m willing to keep working on the “love thy neighbor” thing.

And that’s despite how difficult that’s become, and how weird it’s always been to me that the Christian wing of politics fails to identify with such concepts as compassionate problem solving (See literal example of not loving thy neighbor: border wall). We need that love and compassion more now than ever, don’t we?

(Oops … there I go again, being obviously political in my broad love-shining liberalism, showing my color is blue in the binary of American politics when I really would prefer we all were sensibly purple, if that is the color spectrum we must use.)

No, what I’m interested in doing with my work is inviting quiet consideration, self-reflection that extends to compassionate consideration of others. Be curious and ask compassionate, non-judgmental questions about life.

A work of art is only completed by the viewer, as it passes through their truly singular lens on life. If I showed this work to all 8 billion people on Earth, it would render 8 billion understandings. And if I showed them this same work again in a month, a year or a decade, it would render 8 billion different interpretations as it passes through those same 8 billion ever-evolving filters that since have taken in new information, new experiences, new hurts and joys, lights and darknesses through which we process what we think we know.

The best we can do is be curious, keep learning, keep processing the ever-changing world through our ever-changing personal lenses, and know that we don’t know what we think we know. Don’t let the logical mind get in the way of the all-knowing heart.

The better than best we can do is to be kind while we’re doing the never ending work of learning and thinking and growing as beings. For artists, we express where we are in the moment. Today, I make this work and understand it in this way. A year from now, I’ll understand it differently, and I’ll keep making work that reflects that.

If you want to know what the specific artwork in this blog post means to me right now, I welcome your sending me an email (adam @ humanitou.com), and first telling me what it means to you. Vulnerable exchange is the heart of connection. I’ll answer.

Oh, and if this blog post stoked something in you, an aversion, an emotional reaction, an argument or desire to “correct” me with your opinion … take a breath and sit with it. Reflect upon it. Consider alternative lines of thought. Then email me your good-faith, constructive considerations in a week. If you do that, I’ll answer.

See more of my creative work in the galleries.