It’s Saturday. John Posusta sits on his porch with Cooper, a 6-ish-year-old Shih-Tzu/Bichon Frise. They watch the coming-and-going of Manitou in summer.

Tourists march up Ruxton Avenue. With a raised seat on his front porch, John watches them stream. On road and sidewalk. Up and down.

If the passersby look left on their way up Ruxton, they might catch sunlight glinting off the Posustas’ unusual garden art.

John’s one-of-a-kind bird feeders stand tall in front of his pink, late-19th century house. They represent the unfolding of an accidental hobby.

When John, 54, and his family moved to Manitou Springs from Woodland Park this past fall, the bird feeder they had broke. One thing led to another …

In the obvious “I make art” kind of way, John’s perspective is that his creativity had been dormant since he was a yearbook photographer in high school. But to know his story is to see a thread of it, of ingenuity, throughout the turns and drops and climbs of a life.

He grew up in Clinton, Miss., amid a family of accountants. He went to the University of Southern Mississippi to study accounting —

“In ’84 I was Captain Nemo at Disney World,” John says. “And while I was down there I was inspired to create this foam koozie — I made one with a rope and you could wear it around your neck.

“It was meant to be just for me and my friend when we fished, but my roommate in my dorm got a hold of it and next thing I know everybody wanted one. So I started making thousands of them. I paid for college and everything.

“It kind of sparked this ‘people like an idea, they’re giving me money,’” he says.

So he studied marketing. He embraced the entrepreneurial ride of having become an accidental product developer. It was paying off. And one thing led to another …

The early-20s start of a marketing career. The eventual launch of a marketing agency for tech companies in Atlanta. The waves were up for a young creator and businessman surging … 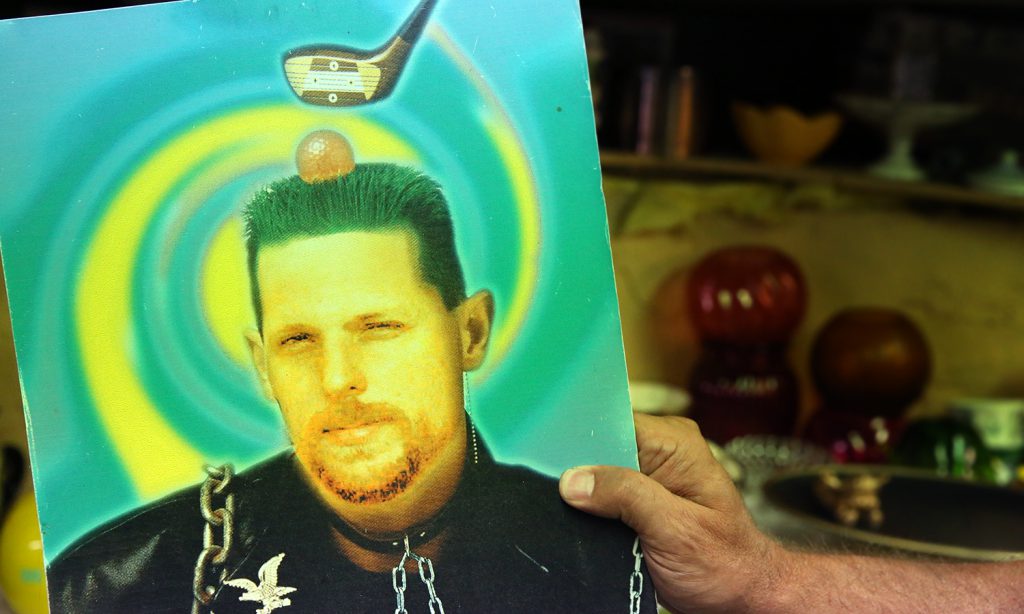 And then they crashed. The post-9/11 economy closed the doors of the agency.

A new career as a consultant for small towns seeking guidance in economic development. It was another serendipitous doorway. Mild confusion, he thought, about an acquaintance’s company website led to …

John again was an idea man! Someone behind economic prosperity for others. A consultant. He shook hands and influenced the paths of the influential, politicians and business leaders.

Then the crush of the Great Recession last decade. Towns put development on pause. Again, unemployment.

John did what he had to do.

John still is doing what he has to do. Putting his math to work as a casino dealer and pit boss in Cripple Creek. He’s ridden the road, taken the twists and made the adjustments life has demanded.

“I know a lot of people get thrown curveballs in life and I’d say this was a curveball for me,” John says. “Going from a corporate guy in a suit, traveling the country and feeling like you’re making a difference and talking to high-profile individuals and these philanthropic endeavors to an hourly, part-time server in a casino — as a man who is kind of wired to be the provider, it’s definitely a jolt.

“When I took that job at Wildwood, I never thought I’d be committing to be there this long (eight years). It was meant to be a stopgap. People were nice, but that job by itself was not able to support a family. I think I’m good at that job, but you start to think, ‘What else can I do? I have a family to provide for.’”

Dealing is math, quick numbers, quick thinking. It’s entertaining. It’s service as the face of the casino. For a man once self-described as an introvert, it’s a step outside himself.

It also at times is facing one’s role in something deeper. 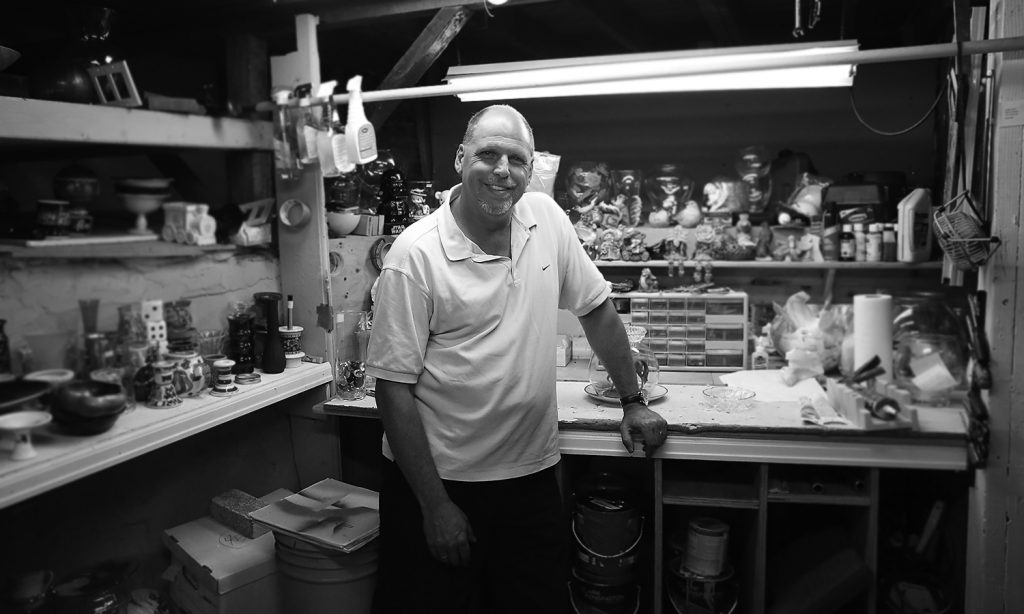 “Being there as long as I have night after night,” John says. “I see people who can’t make the distinction between this is supposed to be there for entertaining and this is something I just can’t stop doing.

“We’re not in a position really to tell anybody I think you have a problem or maybe you shouldn’t be here as much as you are. But at the same time, you see some of these people so often that, in my mind, I guess I kind of question am I enabling an addiction rather than being an entertainer.

“I do both every day, every night. I’m there to provide a service, you know. I know a lot of my counterparts take it all with a grain of salt. They have to. They are like me, they want a job, they need a job.

“I guess you can get really bent sideways mentally if you spend a lot of time worrying about whether this guy has got a problem.

“Coming from a history of jobs where I was trying to make the world better in some way, whether it was helping a business survive or through fundraising to help a museum or through an economic development program … ”

This is a different version of questions many of us ask at some point or other in our careers: I am good at what I do, but is that enough? Is there something more out there for me?

It’s that kind of thinking that led the Posustas to come to Colorado from Atlanta in 2006.

Quality of Life in Colorado

“Once I was exposed to the Rockies, the West, coupled with the fact I was out here promoting quality of living, these projects are about economic development and creating jobs and quality of life issues and that sort of thing.

“On one of my many trips out here to work in Wyoming, I drove down to checkout the Springs. While it’s nice if you’re looking at Pikes Peak, it still felt like a city to me.

“I drove up the road and realized Woodland Park is uphill, quite a bit uphill. Growing up in the South, you always have these ideas of what Colorado is supposed to be like and feel like, you know.

“The more I drove up the mountains and the higher I got — it was a pretty nasty weather day in the Springs but the higher I got, I broke through the clouds about half way up and all of the sudden it was this beautiful blue sky, snow-capped mountains and it was the 3-D version of the Colorado image I’ve had in my head. 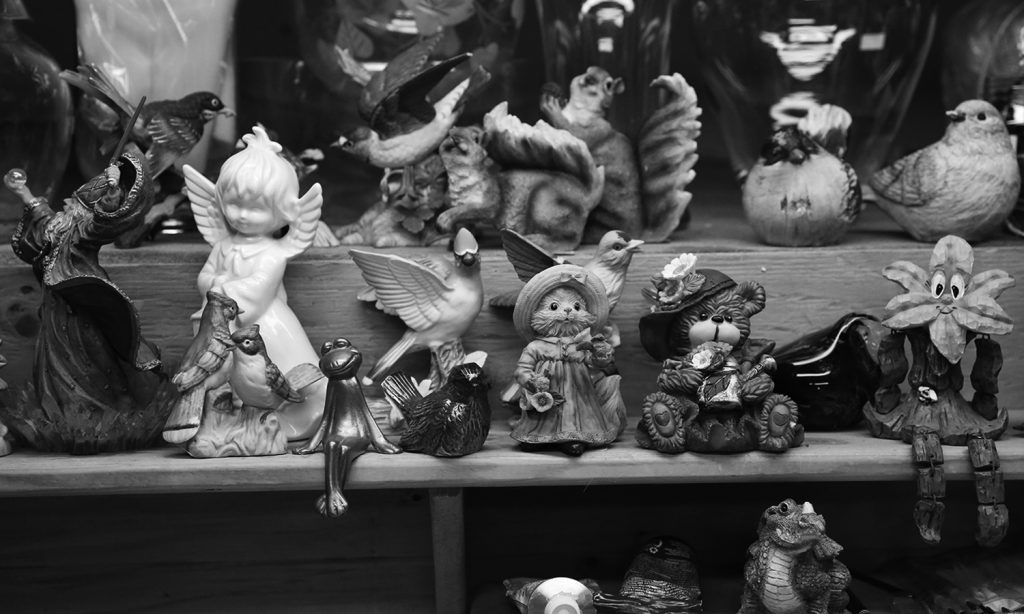 After more than 10 years in Woodland Park, the Posustas, now with sons aged 22, 18 and 15 years, moved down the mountain to Manitou Springs.

And with that a new swim in serendipity: a broken bird feeder.

“I had a bird feeder at my house in Woodland Park, hanging from a tree. It attracted quite a few birds, but I never thought much of it. It wasn’t something I was fascinated by, it just was something I had. In our move to Manitou Springs it broke.

“I’d seen a cup-and-saucer bird feeder on Etsy or somewhere, so I decided I’ll just try to make one,” John says. “Plus, walking around Manitou, I saw a lot of funky artwork. A lot of yards have that unique artwork in them.”

And, of course, one thing led to …

“I was describing the bird feeder I made to a girl I work with, and she asked me to bring it in. I did and she bought it. And because others saw it, they asked me to make them one as well.

“So that was the spark that got me into building these things. Plus, living down here in Manitou and the whole artistic vibe, and I had a workshop that came with this house, I had a place to do it. It just sort of grew from there.”

If you recount John’s path of the past few decades, it could be exciting to wonder where he’s heading now, what fateful turn will point him to what fateful place.

But he doesn’t see bird feeders as a career shift. Rather, a way to engage, an outlet. A feel-good. Him working in his basement workshop to make others happy.

It would be a significant challenge to scale up production of these bird feeders for livelihood. John is only one. He’s the one receiving the custom orders, searching for the custom pieces, making the artwork — and selling his creations at cost of materials, give or take.

The smiles — and sometimes tears — on the faces of those he hands over the bird feeders to, that’s his payday. He is the one who makes that happen, from nothing.

“All this stuff I’ve built and made is from somebody else’s discards,” he points out.

“Things they didn’t want. And for whatever reason it ended up on a shelf, and I see something in it, see purpose for it, and sometimes I don’t even know what its original purpose was.

“This is kind of a reflection of me,” he says.

“There’s engineering, there’s creativity, there’s usefulness (in making the bird feeders). Everything I’ve bought, in most cases, I’m taking as-is and I rearrange it and make something, I think, beautiful out of it.” 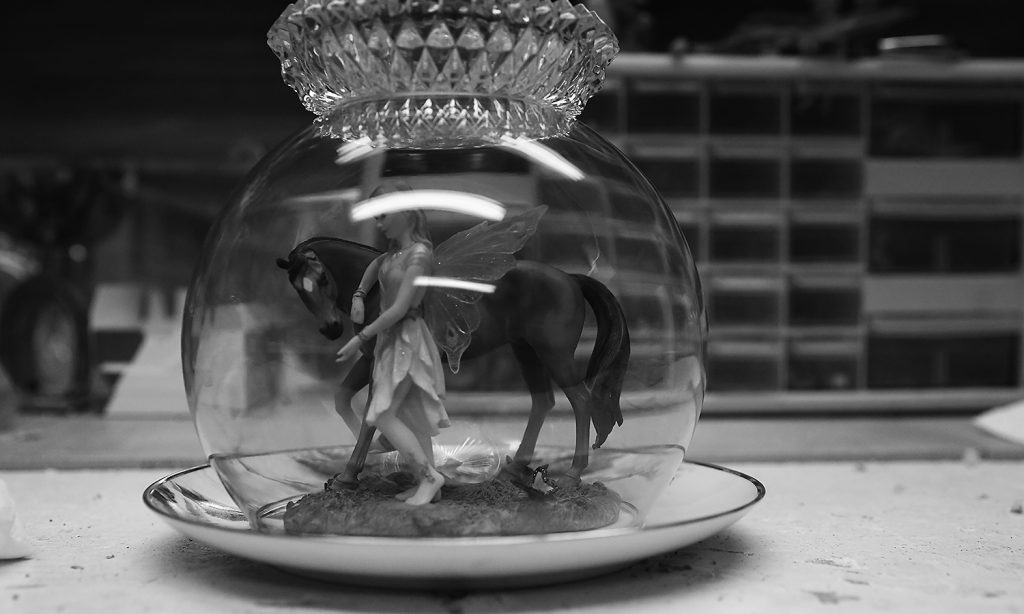 John has made an estimated 100 bird feeders so far. Follow his Manitou Designs Facebook page and you’ll see them come and go. Each its own special art of love.

“Because of the knick-knacks, I can take custom orders,” John says. “If you want elephants, if you want zebras, if you want a bear, it’s still a bird feeder, but it’s also custom made.

“I can add a bit of whimsy to it. Most of the pieces I make are custom orders. I’m working on one right now, she wanted a fairy, so I found a fairy.”

The search for whimsical details can take some time. John gets the ingredients he needs at area thrift stores, mostly. Staircase spindles, plates, dishes, various kinds of vases, and those knick-knacks.

“Sometimes I have no idea how a piece is going to come out,” he says. “The serendipity for one particular piece, or what I call Great Spirits, because that’s what Manitou stands for, for that one piece everything I needed except the spindle was sitting right there in front of me on the shelves.”

Serendipity. And … one thing led to another … We all can relate to that, can’t we? At least, if we’ve gotten enough years deep into life’s unknown and taken time look back over our shoulders. Turns and drops and climbs. Life.

“I’ve had a very diverse life so far,” John says. “But now getting up into my 50s, and feeling the aches and the pains, I think if I’m going to figure out what I’m going to be when I grow up I need to figure it out soon.

“And maybe I don’t ever figure that out. Maybe I’m that feather in the wind that just goes wherever the wind takes me.”