Jack Elder + The Zen of Photography

With a cup of coffee in hand and a gentle demeanor, Jack Elder sat down with Humanitou and dipped into the wide range of his life that has led him here, there and, seemingly, everywhere.

Jack, 74, was an Army brat who went to military school. He was a young man who protested a war his dad, a career soldier who would wear a gold star on his uniform, fought in.

He’s a photographer by art, a newspaper writer by trade. He’s the guy you want on your team when a game of trivia pops up, the man with the hands and know-how to get you from point A to B when the car breaks down somewhere between.

Vinyl grooved with rock-n-roll, jazz and blues music lines a shelf at one end of his apartment and still gets play. Philosophy and religion anchor a wall of bookcases. Bags of cameras and boxes of negatives fill another   area of Jack’s apartment.

In this half of a two-part conversation, we focus on Jack’s art of photography. To also know Jack’s incredibly human stories of love and loss, history experienced and all-around insights, read “Jack Elder | Modern Renaissance Man.” 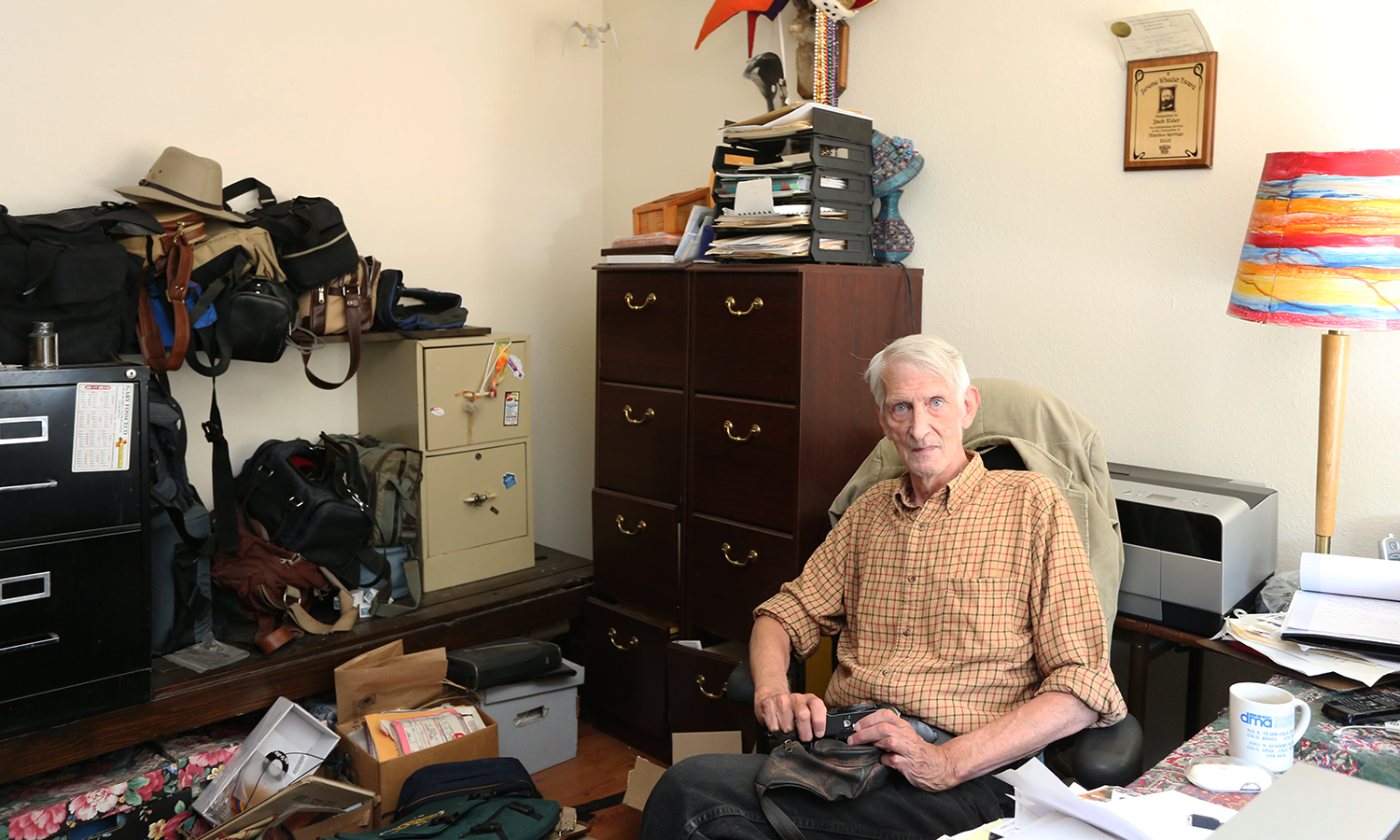 Humanitou: What drew you into photography?

Jack: Photography has been a real constant in my life, and for all of it.

My first experience in the darkroom was in the seventh grade. They have recreational facilities on Army posts, and one of them had a recreational photography setup. I guess it was in Germany. I’d been taking pictures with a little Brownie for a long time.

Back then, most amateur photography was black-and-white. This was late ’50s, early ’60s. That’s when I started developing film.

I’ve got boxes back in a corner with thousands and thousands of pages of negatives and prints. I’ve got too many cameras, even though I’ve been selling them lately.

Over time I thought of myself more as a photographer than a writer. Writing, for the most part, has been a job. It’s something I do for a living.

Humanitou: What have you connected with so much in photography that has not been the case with writing or other areas? Is it personal expression or how do you see your relationship with it?

Jack: It’s very personal. The question of is it art, you hear that a lot. My feeling is that is for other people to decide. I have my own reasons for doing photography that are sufficient to me.

Occasionally, I find pictures of mine make their way to a gallery. Every once in a great while somebody buys one.

Most of the great photographers were discovered posthumously, or nearly so. If I’m ever discovered, it will probably be posthumously. That’s all right.

I have a presence on the web, sort of. An organization called Fine Art America, where I’ve got some photography.

Several years ago, I was invited to hang a big exhibit in the Business of Art Center (now the Manitou Art Center). It was about 40 pictures. A few of them sold. They’re all framed. I’ve got boxes and boxes of framed pictures.

Humanitou: What subject matter grabs you?

Jack: (laughs) I get asked that a lot. I get badgered by gallery owners about it, too. They like coherent collections, thematically coherent stuff. I tell them, my photography taken as a body of work is about as coherent as the world that’s passed in front of me. It’s not coherent.

It’s not thematically regular. It’s all over the place. Some of it’s color. Some of it’s black-and-white. When I teach photography, I tell students that the subject of every photograph is light.

A lot of it is just composition for its own sake. I like the way light is interacting with whatever the situation is, so I photograph it. I don’t photograph landscapes so much as I photograph things in the landscape.

And there’s a lot of plain old composition, and the subject matter, per se, the objects in the picture, may not even be that important. It’s how they are put on a sheet of paper.

Humanitou: Can you elaborate on what you mean when you say the objects might not be the true reason for the photograph?

In terms of composition, I believe, generally speaking, that it’s a very good idea for the viewer’s eye to wander around in the picture.

If you can direct that, if the composition is such that the flow of the eye is natural, that’s good. It’s probably better than if that doesn’t happen.

There’s probably not a lot of extraneous stuff in my pictures. If the viewer views the whole picture, they have a better experience.

Humanitou: Your experience spans film and digital. What have you noticed in the evolution of photographic technology?

That mental process is very alive and well in the digital environment.

You shoot a roll of black-and-white film and you look at all the negatives, and you go in the dark room to decide what to print. I’ll go through negatives and I try to scan all of them.

I got rid of my dark room several years ago. Everything went digital, and I moved into a smaller place. So I got rid of my enlarger and all the things you use to print your own pictures.

I still develop all my own black-and-white film. I shut myself in a closet at night and load the film, then everything else is done in the bathroom.

The computer has pretty much replaced the dark room. I’m trying to reevaluate all of it and see what else I should print.

Humanitou: You have a statue of Buddha sitting on your shelf. You’ve described photography as a solitary experience for you, and as Zen-like. Do you consider photography to be a spiritual practice for you?

Jack: Probably not. That statue was my wife’s. She passed away in October. I say I’m an ethical heathen. (laughs) Let ’em think about it.

Religion has been one of the things I’ve most enjoyed studying over the years. That library of 400 books [pointing to a wall lined with bookcases], there’s lots and lots of books on religion.

Ethical heathenism is probably more akin to Taoism than anything else. Taoism is more of an informal precursor of Zen.

Photography is a very relaxing, very personal thing I do, somewhere I can go to be alone and do expressive things. A lot of it has to do with peace and quiet.

This Humanitou conversation is cross-posted at PeakRadar.com. PeakRadar.com is the Pikes Peak region’s cultural calendar and digital cultural center, connecting residents and tourists with our vibrant arts community. Your source for what’s happening is PeakRadar.com!