While I try to center my focus for the conversation at hand, I notice the smooth and sultry sounds of Miles Davis’ jazz trumpet. They carry from somewhere near the middle of the room, until Floyd walks to it and says, “OK, Google. Stop the music.”

It’s well documented that Floyd likes to work, at times, to the rhythms and flows of Miles Davis. But on this day, it’s only by chance that’s who I’m hearing.

“It’s not like that’s the only person I ever play,” Floyd says. “That’s just one of my favorites. I’ve got lots of favorites.”

Floyd, 70, sat down with Humanitou between projects. There are no works in progress readily visible, just evidence of transition. “I’m about to start painting again,” he says. 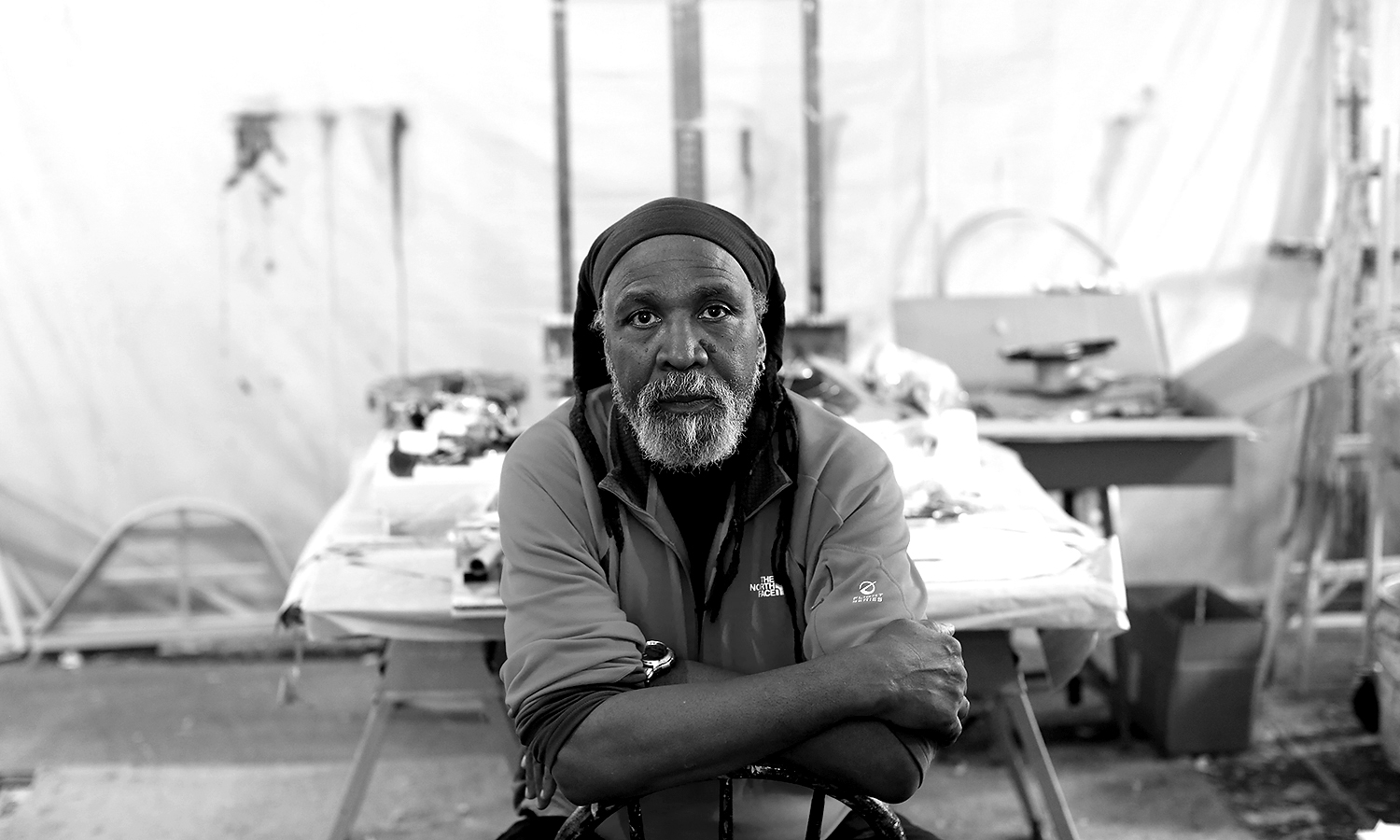 We talk about a range of topics, including creative growth, the rise of societal turmoil once thought buried, staying true to one’s line, and how Floyd views legacy.

Floyd’s JANUS show that recently inaugurated the Marie Sharpe Gallery at the new Ent Center for the Arts in Colorado Springs was about to close.

Humanitou: What will happen with your work after the show at Ent closes?

I don’t sell a lot of work. Some of it’s just too big for venues other than like, CU (University of Colorado) just bought a piece up in Boulder for their collection. I’ve got a few collectors in Colorado Springs that will buy something.

I haven’t been with a gallery for a long time. I have an agent, Wylene Carol, and my daughter, Java, that take care of all the business stuff.

I’ve got the biggest collection of Floyd Tunsons on the planet. (laughs)

But I don’t care. This is my passion and what I do. I’m going to continue to do it whether it’s a commodity or not. That keeps me happy. As long as I can do this, I’m cool.

Humanitou: Beyond art, what is something about life you’d tell 20-year-old you? About dreams, life in general, whatever?

Floyd: God, I had the highs and the lows, I don’t know how to convey those experiences to a 20-year-old. I know they’re very callow at 20 and even myself at 20, I thought I was on the path of knowing everything. (laughs)

I didn’t know squat, in retrospect.

For me, just being African-American in the United States and growing up, I have such a different perspective on a lot of things that I’m sure other artists and other people don’t have, because of just my background.

I’m a Sixties kind of guy. That’s when I cut my teeth on a lot of things, I’m sure. I just think I never thought that, in retrospect, we’d be encountering some of the same problems that we encountered 20, 30 years ago.

I never thought I’d be addressing some of the things that I’m having to address now. I thought we’d be past a lot of that.

Humanitou: It does feel like a crazy time again now. I try to maintain some calm based on this thought: Every era has its turmoil, its fears, and moves through it.

Humanitou: And what in all that time of the Sixties do you see in what’s happening now?

Floyd: That was a tumultuous time. But nothing outlives the day. The pendulum will go back the other way, but right now it’s pretty extreme on the left and the right.

I might be wrong, because, like I say, I didn’t think we would be addressing so much racism and discrimination, and just the alienation of Americans against Americans like we see now.

Humanitou: You mention racism. I’m guessing that topic comes up somewhat often in interviews or conversations, simply because you’re a black man and people ask for your perspective. But I know from having read some other interviews you’ve given that you have been clear about not trying to speak out for all —

Humanitou: Sure. I wonder, though, how are we collectively supposed to move past issues like racism when people are afraid to face it, or don’t know how to talk about it?

Floyd: We have not addressed race as a nation. Until that’s brought to the forefront, I don’t see us resolving anything. It’s a subject that’s taboo, it seems. It’s something that really needs to be addressed before we can move on. 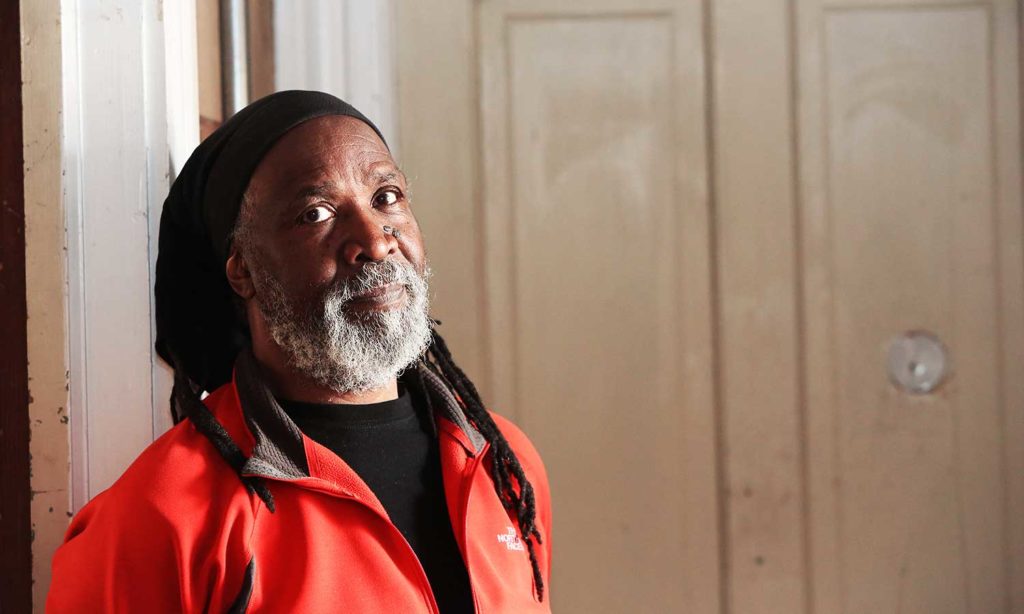 Humanitou: There has to be interest in addressing it, and I think a lot of people are afraid of that step.

Floyd: I understand them being afraid of it, but, you know, just because you have fear doesn’t mean you should go into flight or hide. Sometimes you have to confront those fears. It really needs to be confronted, and I don’t think it really has been.

We’re on the low end of the totem pole. On everything. Education, economics, you name it. We’re always in that lower echelon. It becomes pretty frustrating over 70 years.

Humanitou: I think it gives people coming from a place of discrimination perspective to see things that others, whether intentional or not, can live without being aware of.

Floyd: Right. They just don’t have that kind of exposure to have to deal with those kinds of things. It gets swept under the carpet or you just don’t deal with it, because you don’t have to.

We are just the minority. The majority has certain rights and privileges that exist that are just part of being, being in the privileged class. We are not. We know that.

It’s hard to tolerate sometimes, but at the same time, it’s not the first time we’ve encountered this, and it won’t be the last. I feel we always can overcome just about anything, if we have good people step forward.

Those that don’t are complicit in the problem.

Humanitou: You’ve not been with a gallery for many years. That takes a sort of commodity-oriented focus. Not that there’s anything wrong with making a living as an artist, of course.

Floyd: No. Right. I wish I could make a living. I’m too eclectic. I’m not really the kind of artist a gallery wants to deal with, because they like to have consistency.

Humanitou: You stay true to your line.

Floyd: Yeah. I have no regrets in staying true to my line. That’s what makes me proudest of myself, not being distracted, not going for the dollar, and not trying to make it a commodity.

If I sell something, that’s icing on the cake. I’m glad to be able to do that. I’m glad somebody even wants to buy the work, that somebody appreciates it enough to put some dollars down and have it in their place or wherever. That to me is reassuring.

But if it doesn’t happen, I’m still going to be doing what I do. That’s why I have so much work in storage, because that’s where it goes. And that’s fine with me. 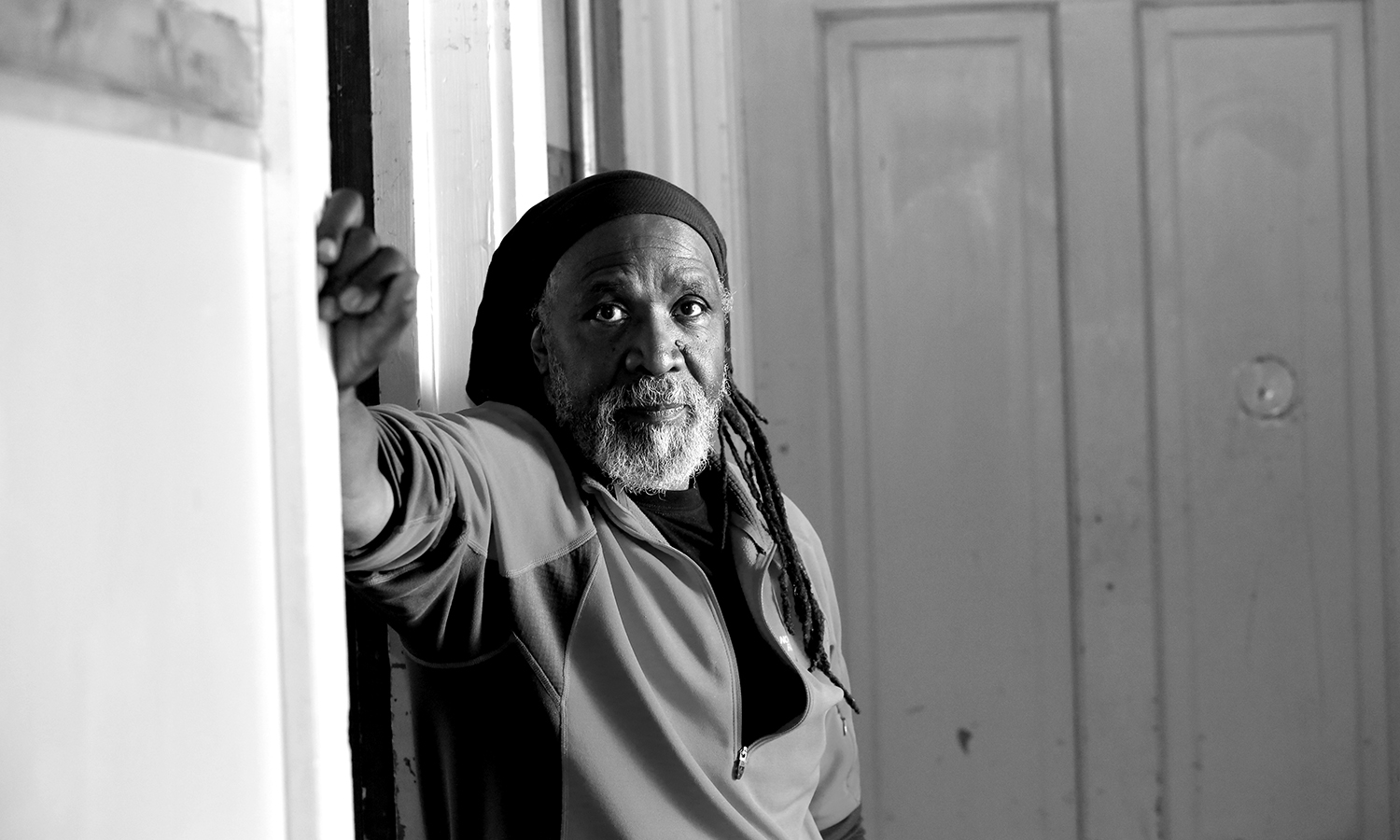 Humanitou: I’m guessing many people look at you as an example of a successful artist. How do you define success?

Floyd: I think it’s having integrity for your work. It’s having good friends and great support. It’s having a venue where every now and then you know your work is going to go. Like I know I’m going to have a show in 2019 in Denver at RedLine.

It’s always nice to know you have a venue where you can do your work and you’re going to get the exposure. That’s successful to me.

Most people think it’s always monetary, and it’s not. I tell people I’m a poor artist, actually, but that’s only in monetary means. I’m really wealthy in other ways.

I’ve paid my dues to get to this particular level at something that is my passion. I haven’t given up my integrity to follow the dollar. I have a great place to live and work. I have a community that’s really receptive and has been supportive. I’ve helped a lot of young artists that were my students to pursue this.

That’s what being successful is to me. I feel very successful. I’m feeling at this particular stage in my life to have good health and be able to do this, that’s fine with me. I look forward to waking up every day and having the possibilities.

Humanitou: You’ve said your work isn’t so much about inspiration as it is hard physical effort.

I work because I love the process of whatever it is I’m doing. In those processes, that’s when it all takes place. That’s when the endorphins kick in. That’s when it’s the best, solving those visual and aesthetic problems.

Humanitou: How do you look at your work that is far in the rearview? I sometimes look at something I thought at the time was good, exciting, fun and feel embarrassed now, like, “Why did I ever think that was good?”

Floyd: Because that’s where you were at that time.

Humanitou: You’re comfortable with the idea of looking back and not beating yourself up about it.

Floyd: I can look back at some stuff and think that’s awful. I can laugh at it. I thought it was wonderful then, but in retrospect that’s not so wonderful.

The work is not sacred. Everything I do is not wonderful. It might have been wonderful to me. I accept where I am at the time I do something. Everything I’ve done is acceptable. When I sign my name to it, that’s like saying, “I approve.”

And it might be 10 years later when you look at that painting and say, “Oh, you approved that piece of shit?” Yeah, I did, because at that particular time that’s where I was; I thought that was wonderful.

That’s how you know if you’ve grown or not.

Humanitou: You’ve been making art for more than 50 years. What is the legacy, that stamp on art you want people to think of when they hear your name 50 years from now?

I know where I’ve come from and where I am, and what this all means to me. I don’t know if that’s going to mean the same thing to people who view the work 50 years from now. Or even 10 years from now.