Failing Our Way to Success

Failing our way to success is not a new idea. Counterintuitive for many of us, but not new. Tech and business and creative giants have touted it. Psychologists have studied it.

Inspirational posters and Instagram memes quote our shiniest champions and thinkers who give credit to their failed attempts as ingredients for accomplishment.

Winston Churchill, former Prime Minister of the United Kingdom: “Success is stumbling from failure to failure with no loss of enthusiasm.”

Jeff Bezos, founder of Amazon: “Failure comes part and parcel with invention. It’s not optional. We understand that and believe in failing early and iterating until we get it right.”

C.S. Lewis, writer & theologian: “Failures are finger posts on the road to achievement.”

Michael Jordan, greatest basketball player of all time: “I’ve missed more than 9,000 shots in my career. I’ve lost almost 300 games. Twenty-six times I’ve been trusted to take the game-winning shot and missed. I’ve failed over and over and over again in my life. And that is why I succeed.”

J.M. Barrie, novelist & creator of Peter Pan: “We are all failures — at least the best of us are.”

It’s the darkness that gives context for our appreciation of light, and the downs in life for the ups, right?

The list of quotes about failure as essential to success must be virtually endless. Yet it, generally, still feels counterintuitive to court failure, to embrace it and appreciate it as necessary. 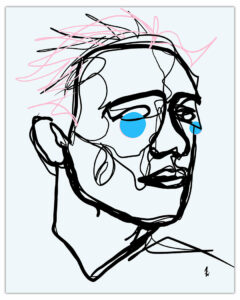 Creatively speaking, I encounter what I perceive as personal flaws and failures constantly. And I continue to struggle with that. After all, doing well is the goal; failure in and of itself is not the vision. So I need occasional reminders of failure’s value, and I recently received one.

I’ve written how venturing into using digital tools — i.e. the Procreate app on iPad — is helping me to create (and fail) prolifically, and to learn faster. And I’ve written about feeling like I’m creatively all over the place, maybe, in part, because of the speed with which I can blurt out visual ideas digitally.

That being “all over the place” visually and aesthetically itself sometimes feels like failure. Like, why don’t I know the one lane I’m to choose (as if really need to choose, right)?

But it’s through that prolific iterative process that I keep pushing the work, taking it a step further, further, further … And from within that umbrella of “failure” that is my aesthetically scattered creating, I’m pulling elements into new pieces and developing something that I trust is leading me somewhere.

For example, I recently stumbled onto a new-to-me process for drawing simple, minimal line portraits. Like my drawing that I now call “Brown Eyes (Ready).” It was the first of this kind that I drew, and it came about from frustrated feelings of failure.

I was using reference photos to help me find and practice a technique for drawing the simplest single-line portraits, for being able to allude to the face and its features with the most minimal of structures. I kept disappointing myself with the result and starting over. Over and over and over …

Because I was using Procreate and drawing digitally, I was able to hide each failed drawing as an unseen layer, clearing my canvas to start fresh each time while keeping the previous drawings available to me, if I wanted to return to them.

After creating a couple dozen of these drawings and feeling like I was getting nowhere, out of frustration I made all the failed drawings visible at once, overlapping them. It was as if I wanted to pile the misery of all my creative suckitude onto myself at once.

I stacked up the layers until the canvas was muddied and … interesting. I realized I was looking at something altogether different, compelling and worth considering. Something certainly more interesting in its sum than any of the pieces individually. Gestalt art. 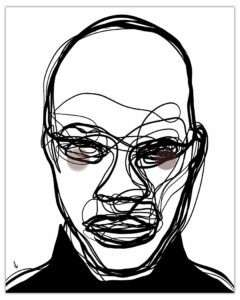 The final version “Brown Eyes (Ready)” is the result of my playing with the layers of failed individual drawings, making varied combinations of the layers and choosing which ones to keep, which ones to shed.

That drawing, and the several I’ve created since in the same style, in effect are successful amalgamations of “failure.” I had to take each step and even accidentally walk into the mess of them all being smashed together to get where I was meant to go.

And I am reminded again of this creative lesson: Something artful often comes about at the intersection of intention and oops; our work is to recognize that moment of aha!

The greatest creative skill then, after the one required to break inertia and take creative action against all forces of Resistance at all, perhaps, lies in applying that discretion of recognizing what’s worth keeping or carrying forward, and what should be set aside.

Of recognizing that wispy-thin line between success and failure, and to which side of the line we are leaning at any given moment.

And, of course, to keep going.

“Giving up is the only sure way to fail.” ~ Gina Showalter, author.