I’ve been creating work that feels all over the place. I have a lot of interests. And maybe I’m still trying to figure out who I am creatively; maybe I always will be. I appreciate the work of many others, and so I absorb many influences.

I see threads I carry through my work, even though I haven’t chosen a singular lane, a defining aesthetic. There just seems to be so many of those threads. 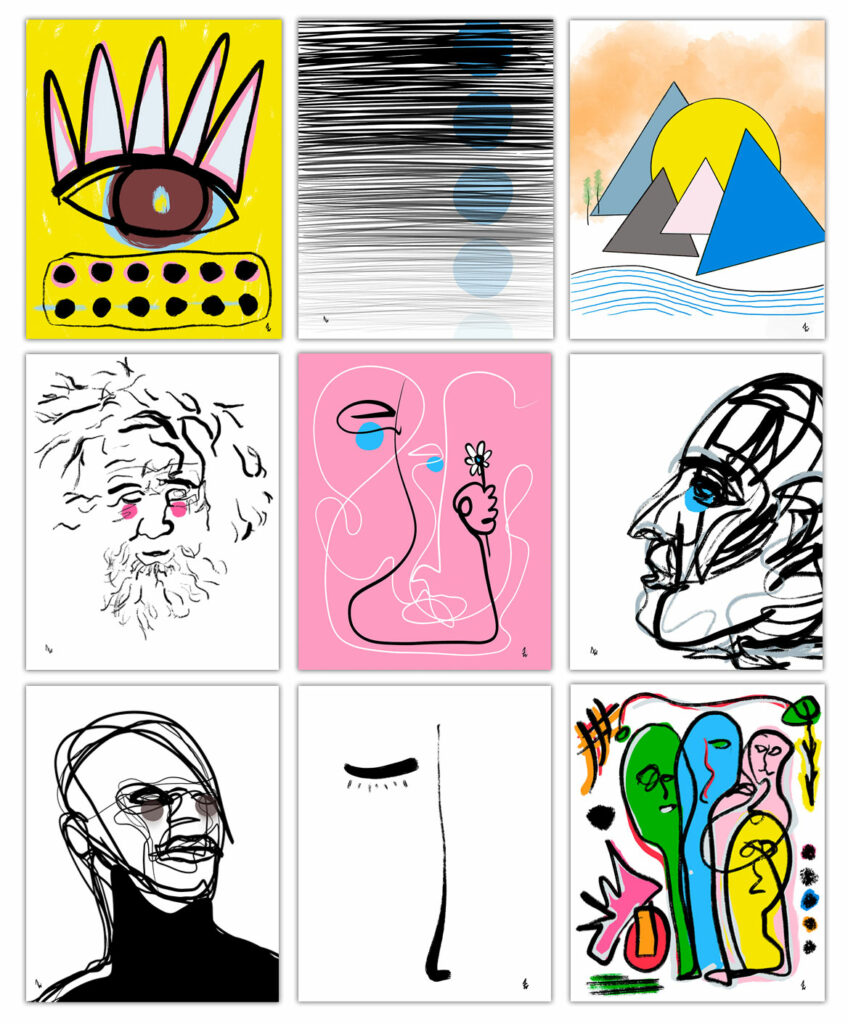 And some are, on the surface, contradictory: simplicity and complexity; multiple colors and black-and-white; abstraction and crystal clarity; geometrics and free flowing swoops; minimalism and … not. And there are plenty of faces and especially eyes.

But I feel the nagging pull of that social conditioning that insists we declare ourselves, to identify as one, clear thing in life. To offer up a flag that makes us easy to read and sum up instantly, like bumper stickers. All for others who generally aren’t interested enough to sort through nuances and actually get to know us, to make it easier for them to judge us by our covers.

It starts early, this conditioning. Pink or blue. We’re given the visual label, the shorthand everyone uses to decide who we are before we even know for ourselves.

An anecdote: When my oldest son was a baby and we were at a playground, another dad asked, “What’s her name?” I said, “His name is Taos.” He said, “Oh, I thought I saw some pink on his toy.”

And then there’s the ubiquitous “What do you want to be when you grow up?” that teaches us from a very young age that that’s a question we will need to answer, a life requirement.

By sheer repetition of that seemingly harmless question, we’re trained to seek the one label, one idea, one truth many of us don’t know how to figure out, and to stick to it for the long haul, to make it our identity, our conversation starter, our life’s work and meaning. (See Multipotentiality & Emilie Wapnick’s TED Talk)

I’ve been making art lately that, because it shows a variety of aesthetics, seems to highlight to me my lack of knowing what I’m doing. It’s a recurring thought, fear, frustration.

“I don’t know what I’m doing … I really have no idea what I’m doing.” Again, as if there must be only one way, and an absolute certainty and/or commitment to it. 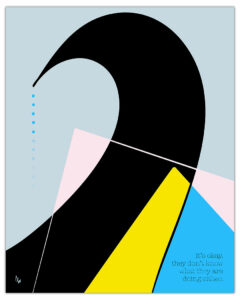 In my lighter, less self-doubting moments, I come up with something like this, and even make some work with it: “it’s okay. they don’t know what they are doing either.“

Yesterday, I was feeling that dip into frustration, confusion and moody wallowing in impostor syndrome. “No idea what I’m doing. I’m a fraud.”

This morning, I wrote double my daily dose of morning pages. I refilled my coffee mug. And a thought popped to mind “Okay, I might have no idea what I’m doing. But today, I’m going to feel good anyway.”

And I recognized that sometimes we just have to choose it, even if we’re unsure it’s true. And to flow with the they that doesn’t know what they’re doing either rather than the they we think are limiting us.

And an epiphany of the obvious: to keep creating.