Nineteen chickens gather around Steve Oliveri in anticipation. He pours dry food onto the ground from a white, five-gallon bucket. The work of the moment is done.

Steve, 29, is a caretaker of Flying Pig Farm in Manitou Springs, along with Elsa Kendall, Barak Ben-Amots and Alex Hare. Together, they oversee the nine acres of land, the animals, the community collaboration, and the history that forms a slice of Everard Keithley’s legacy.

“He was superintendent of Pike National Forest,” Steve says. Pointing to rows of pines nearby, he adds, “That was part of a tree nursery planted by him. Those trees are over a hundred years old.”

As Steve talks with Humanitou, he eloquently lays out a web of intersections. His passion runs through sharing in community at Flying Pig Farm and in his work through Bristol Brewing, his growing interest in spiritual ecology and his definition of hope.

Steve also explains how his natural yin spirit simply is not one of a swordsman. You know, if life were a game of Dungeons & Dragons.

Humanitou: Let’s go right for it. What inspires you?

Steve: Recently, I have been so heavily inspired not only by the story of our species and how we have come to this point in time, but connecting that to a broader field, which is emerging and is resonating with me so wholly. It’s called spiritual ecology.

It’s this understanding that the inter-workings of the natural world can also be spiritual. Inspiration for me in my early life definitely came not only through good, whole, religious inter-workings that later in life, maybe, I began to disconnect with, because I wasn’t having the same kind of interactions I was as a child. 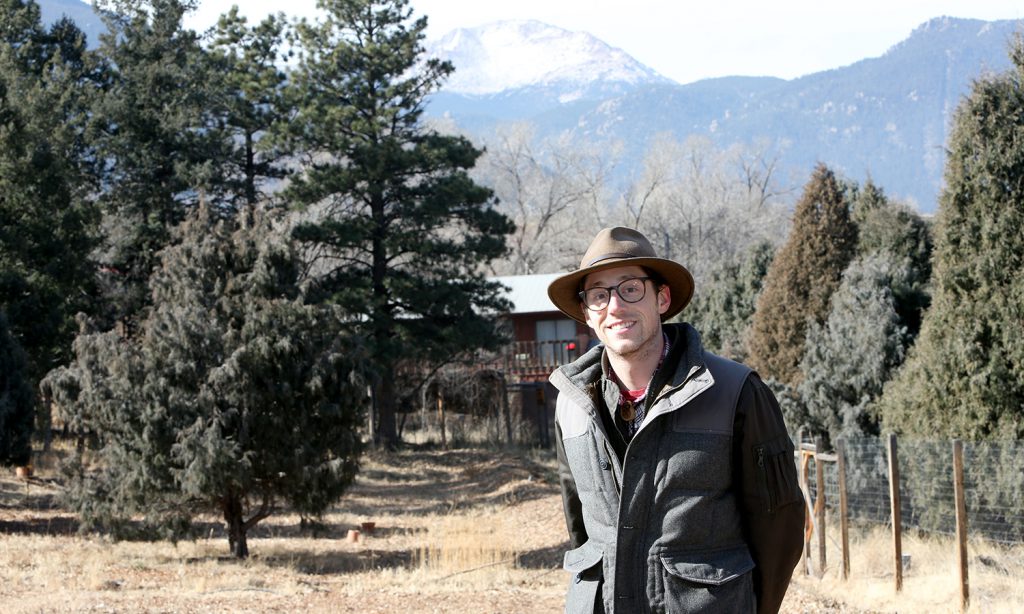 I have rediscovered this inspiring wholeness that exists between acknowledging who we are as a species and what our capabilities are, and how those might relate to responsibilities and obligations to the world that has allowed us to become who we are today.

Some of the beautiful ways that comes through is not only in cultivating the land and doing our best to do so in a way that is as close to the natural order of things as possible, but also communicating with it.

I’m always inspired when my collaborators on this (Flying Pig Farm) project just lean into what might be uncomfortable or strange or communicating directly to the land, speaking to the compost pile, thanking it for the work that it’s doing as, essentially, the Earth’s stomach on the outside.

But also playing music, and not necessarily playing music for the sake of another’s ears, but really just for all to hear, whether that’s the birds or the deer or the plants that are growing. That’s where a lot of my current inspiration comes from.

Humanitou: Beside your role here on the farm, you work at Bristol Brewing. Is there any crossover of that spiritual, natural connection for you between the two experiences?

Steve: A lot of the work that I do at Bristol is focused around mentorship, coaching. I also picked up, when I have the time for it, a focus on sustainability. It hadn’t really been a person’s role before, at Bristol.

What’s come with that has been a lot of awesome connections in the community. Mike Bristol designed the absolute dream system to brew on, and that is extremely efficient. There isn’t a lot more ground to cover, in terms of, figuring out ways to brew on that system better with our resources.

The first thing I did was adopt a waterway, which is a program the City of Colorado Springs runs. That meant Bristol took responsibility for cleaning up Cheyenne Creek, which is directly across Tejon St. from Ivywild School, a three-quarter-mile segment.

We’d commit to going out two to three times a year to clean up that waterway. Not that our water is coming from groundwater; it’s coming from utilities, which pull from even on the other side of the mountains, as well as reservoirs in the mountains.

But I just felt like, if we could fully inhabit the idea we were taking care of water in our community as a resource, then we could show not only that we’re responsible stewards of it, but in an ecological way we’re showing the actual, physical community of Colorado Springs, of the land here, that we’re doing our part to try to care for it. 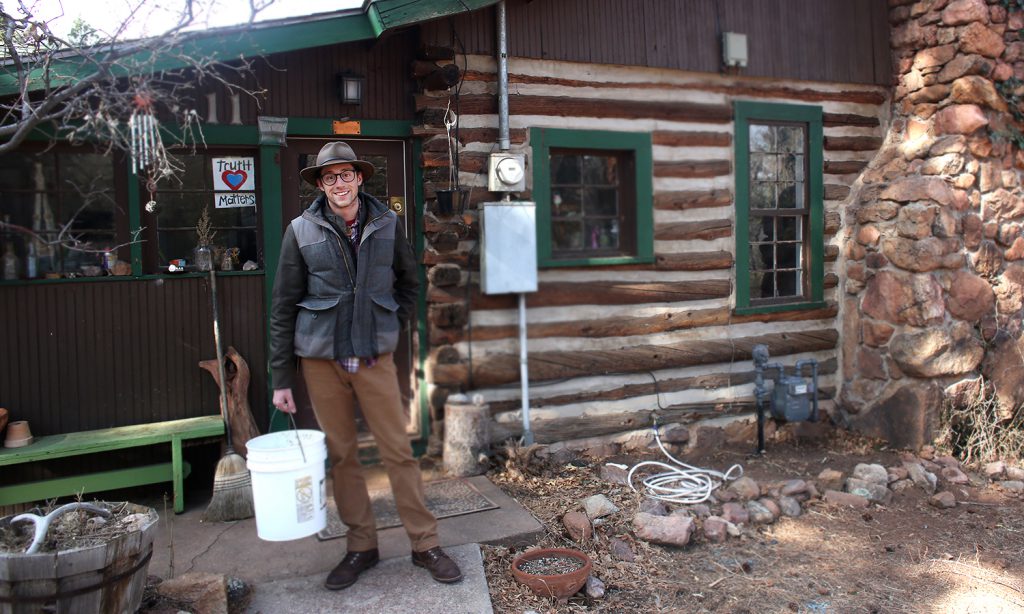 I thought it was a neat opportunity for us to bring that conversation into a public space, that pubs were the space where people would come and share their ideas and collaborate through conversation. So, I thought, why not get more breweries involved if they have the same kind of mindset?

All coming together, trying to figure out how those governmental and nonprofit organizations can support breweries and how can breweries support those entities in the way they do their work.

Humanitou: I imagine the sustainability conversations you’re part of through Bristol carry over to Flying Pig, and vice versa.

Steve: Definitely. A lot of that interest comes from what has been cultivated for me here at Flying Pig Farm. This is hobby only in that I can’t define it as income. We all continue this project because we feel like, for one, we need it, and we feel like also the community needs it.

When Jeremy [Tackett] moved over to Smokebrush (from Flying Pig) and we made the commitment to ourselves and to the land that we were going to continue this project, we decided that rather than trying to grow it all ourselves, knowing that we all were working full time, we would try to identify within our capacity what was possible for us and then recognize that, in a space like Manitou Springs, land like this is rare, especially out of the flood zone.

Humanitou: I first heard about these community garden opportunities from Peggy Dlugos, who grows dye plants to use in her fiber art making.

Steve: Yeah. That’s a really great connection we made with me working (at Bristol) with Nikos [Pulos], and then meeting his wife Melanie [Audet]. Melanie’s connection with Textiles West is what got us connected with that possibility.

We do want to explore that this year, because we think it’s also a really cool opportunity to have a workshop or invite folks to come and learn about that.

One of the things that we do is we host these community contribution days and potlucks. That was a holdover from the way that Jeremy had initiated the project.

Steve: Yeah. The days are short. Between work and spending time in the evenings here and, a lot of times it’s weekends, I do try to continue creating as much as possible.

I feel like however you create, that form of self-expression is necessary to how we process what happens to us at all other times of the day or week.

I have started to try to work with either natural materials or natural shapes, as much as possible. I’m beginning to really identify that, for me, that’s where wonder comes from, that’s really where the magic is.

Thomas Berry has a quote that, this is probably paraphrased: The sacred is that which evokes wonder.

For me, living on this property, a lot of what evokes wonder is identifying how much of this is already designed to work well together. Spending time in that really makes me feel more at peace when I am out doing my other activities of the day.

For how long in our lives are we just totally taken by the wonder of the world and the stars and the sky before we start to have other distractions that come into play?

Humanitou: How do you see yourself and how that relates to your vision of the world?

Steve: I recently had an opportunity to meet a man who immediately identified between Elsa and I that the energies within us are, sort of, opposite from what you might expect from genders, and that Elsa leads with a lot of yang energy and I follow with a lot of yin energy.

So, this idea that much of where my personal spirit resides is in a more open-hearted, more receiving kind of way. For me, listening always has been such a joy and has been a way to connect authentically with someone I’m interacting with. 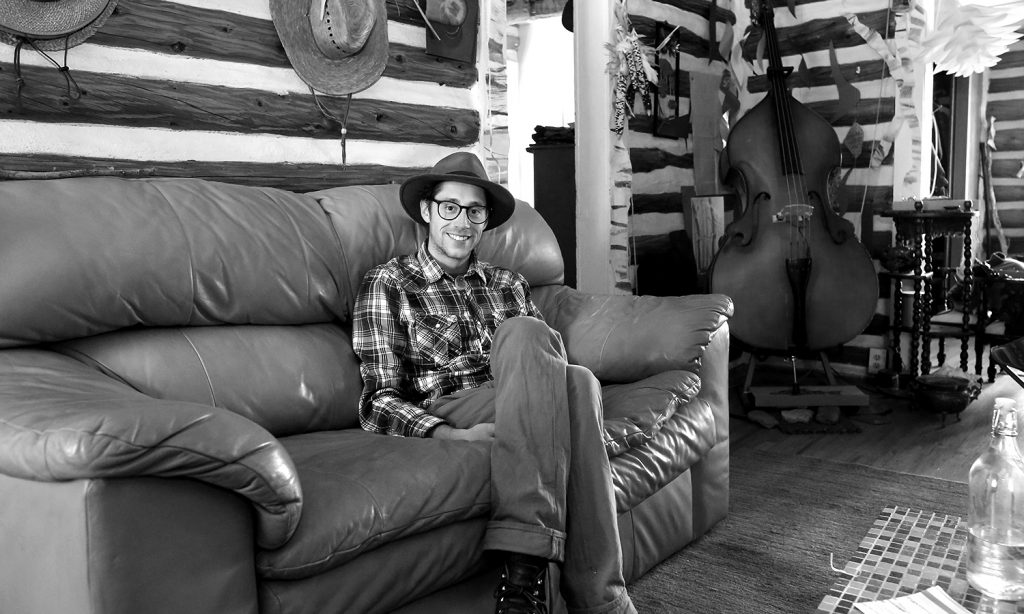 The idea that somebody else was able to see that energy as well reaffirmed the belief I had of my own self, that the way I interact is in a supportive kind of way.

To be really nerdy about it, if we were playing Dungeons & Dragons I would be the guy in the back casting the spells rather than the guy in the front with the sword. To me, the magic of it has always been that supportive character.

Even as that pertains to my time at work, recognizing that I’ve found not only my personal fulfillment, but I find the greatest opportunity for impact in helping others develop themselves, helping others reach their full potential.

I think, in a lot of ways, as that pertains to the natural world, it has also lent itself to a lifestyle where I am interested not only in observing but also to nurture, to encourage, to empower and push forward, and to give that to the plants or the chickens or whatever might come through.

Humanitou: I’m hearing a lot of positivity in your words. Does that ring true to you, you are a positive person?

That definition is that hope requires struggle and hope is not necessarily a mindset so much as it’s an active struggling, it’s an act of committing to progress. What that requires is being able to see what’s required for progress and attempt to meet it, and to be able to look back and see that progress, and celebrate it.

For me, positivity comes in the understanding of this self-actualization that we are the ones that have the ability to work towards the things in our lives that we feel are positive.

If we can see that we are making small steps, then we are moving. We don’t necessarily need to be taking large steps in order to feel accomplished.