There’s a haven for the childhood spirit in downtown Manitou Springs: the Penny Arcade.

The first several times I went there with my two young sons was a couple winters ago. We’d be up early, as is our collective family habit for now, and so we’d often have the outdoor rides at the arcade to ourselves.

The joy for those modestly sized machines is capped at 10 years of age. I’m decades of years and dozens of pounds beyond acceptable to take a motorcycle ride with “Tom & Jerry,” or blast off in a rocket ship, ride a fire engine, or take a whirl on a mini Ferris wheel.

Being at the arcade so early in the mornings, and during off-season, we’d live in Manitou for at least 18 months before we passed through the doors during open hours. Rooms and rooms of games — pin balls, shooters (rifles, handguns and basketballs), video games, toy-dropping metal claws, skee ball, and on and on — fill the spaces with pastimes of the history and the now.

And the serious in me gave way to the revived kid in me. I love the Manitou Springs Penny Arcade and its ability to get money-conscious me to let go of nickels, dimes and quarters in exchange for nothing more than frivolous pastime. A simple, inexpensive thing but a trick nonetheless.

It’s wood case has two metal cigarette holders affixed to either side of the metal handle used for underhand basketball shots flipped from the freethrow line.

The game slightly predates the 1954 setting of the famed movie “Hoosiers,” but the details of the arcade game call that slice in time to memory all the same … Muted uniform colors, narrow lane with bulbous key, Daisy Duke shorts decades before Daisy Dukes were a thing, the worn wooden floor boards, and that underhand technique.

A defender slides back and forth across the lane, arms raised stiffly and moving slightly forward and backward. When I’m not paying attention, he manages to block a shot. Success in this game is all about timing.

Let the defender slide just out of the way of the trajectory from the shooter’s waist to the basket, with its hazy plastic cone painted with white netting. But don’t wait too long. The shooter gets 15 basketballs, fed into his hands on a timer. The game doesn’t care if you failed to empty those hands from the previous load. 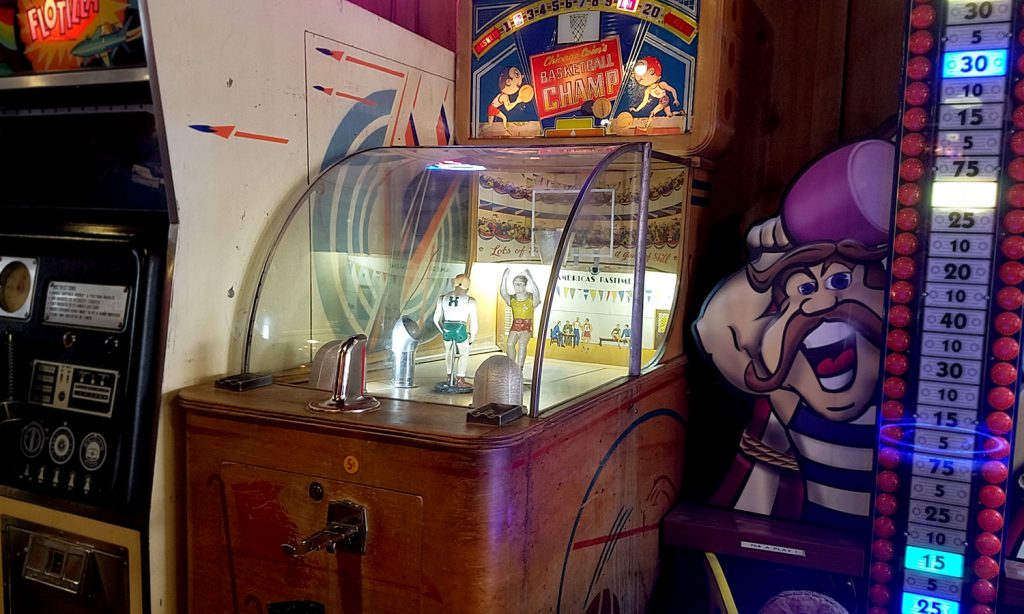 To shoot, squeeze the silver handle with force. A child’s grip isn’t enough, and all too often my own urgent force leaves the ball a shade short, clanging bricks off the front of the rim.

When the motion is right, the ball arcs on a line that slants so-slightly to the right. As it drops into the cylinder, it swirls counterclockwise down the hard net, popping a light bell-dinging sound into my ears.

With each make the next number in sequence lights up on the scoreboard above the glass-encased court. Light up the six and another box on the scoreboard will darken the yellow “Rookie” box and lighten the red “All-Star.”

I find a rhythm, pretending I’m sharpshooter Jimmy Chitwood in Hoosiers. The noiseless crowd painted in the balconies behind the basket doesn’t change reaction no matter how dazzling and dinging my displays of skill.

But the chaotic sounds of the arcade around me pump energy into the flow.

Childhood revisited, if a mix of childhoods and even mid-century ones I am too young to have known. I love the Manitou Springs Penny Arcade, where again I get to be a Basketball Champ, nickel by nickel.