Layla Redding starts water to boil on the stove while we sit in her living room, awash with natural light. Art from her friends hangs on each wall. A bookcase next to the door includes books of yoga and nutrition, and a Cyndi Lauper memoir.

While we talk, we sip green peach kombucha. Though Layla has a background in art, brewing kombucha is her primary creative expression of late. It also is the heart of her business, Athena’s Goblet.

Kombucha jars of varied sizes containing varied flavors are shelved here and there throughout the small apartment. They are examples of Layla’s focus on wellbeing, creativity and connection. To self and others.

Layla, 43, talks with Humanitou about healing through kombucha brewing and the magic she feels with yoga. She talks about her internal creative struggles, what she sees in comedian Sarah Silverman, and the dialogue of differing love languages. Among other things. 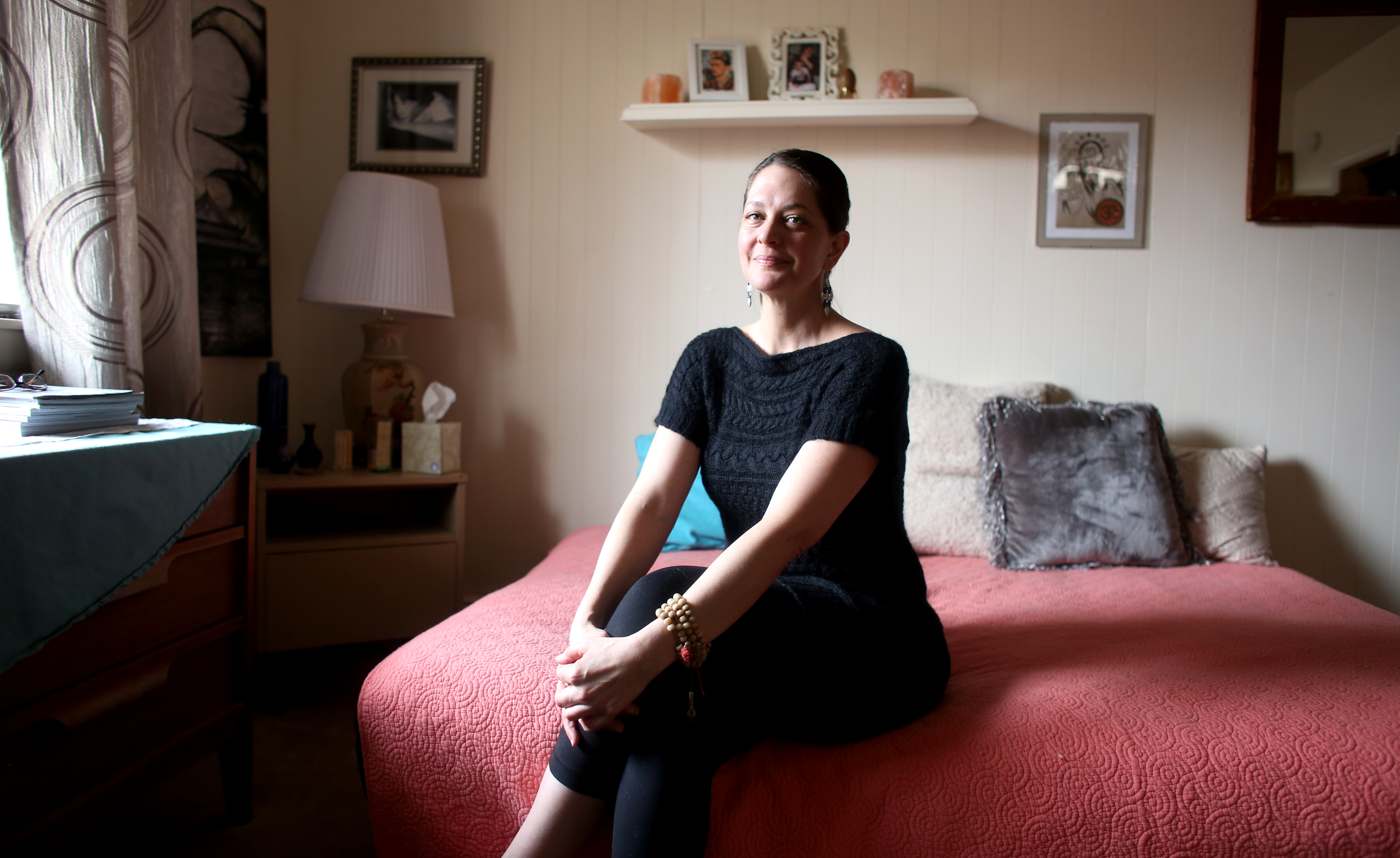 Humanitou: What is it about kombucha that’s making it so popular? I’m not sure trend is the best word but …

Layla: Well, I think trend is somewhat fair to say, and then you find out something that recently has become trendy is really very ancient.

This goes way back to China, and that’s where the kombucha scoby — which is a mushroom, it’s a living organism — was first used for its medicinal properties. Ancient, wise Chinese men were brewing this tea.

Humanitou: What are the health benefits of kombucha and why do you, personally, value drinking it?

Layla: To be completely honest, I drank it because I found it delicious, and drinking beer and wine on a regular basis isn’t good for us, right?

Kombucha became a substitute, where I would choose (not to drink alcohol) for certain periods of my life or transitions — when I did my yoga teacher training, I didn’t have any alcohol the entire time — and it quickly became a substitute. It’s very bubbly and effervescent.

Humanitou: You have a Bachelor of Fine Arts. I think you’ve mentioned to me before that you haven’t painted in a while. Is that something you miss?

Layla: Definitely. Well, I have this internal struggle. I feel like I suffer this paralysis. But I think that I’m comfortable now accepting that sometimes life takes over, and we have to live in our left brain, and we have to go into survival mode. We have to worry about being providers. Being a single mother, that was up to me. 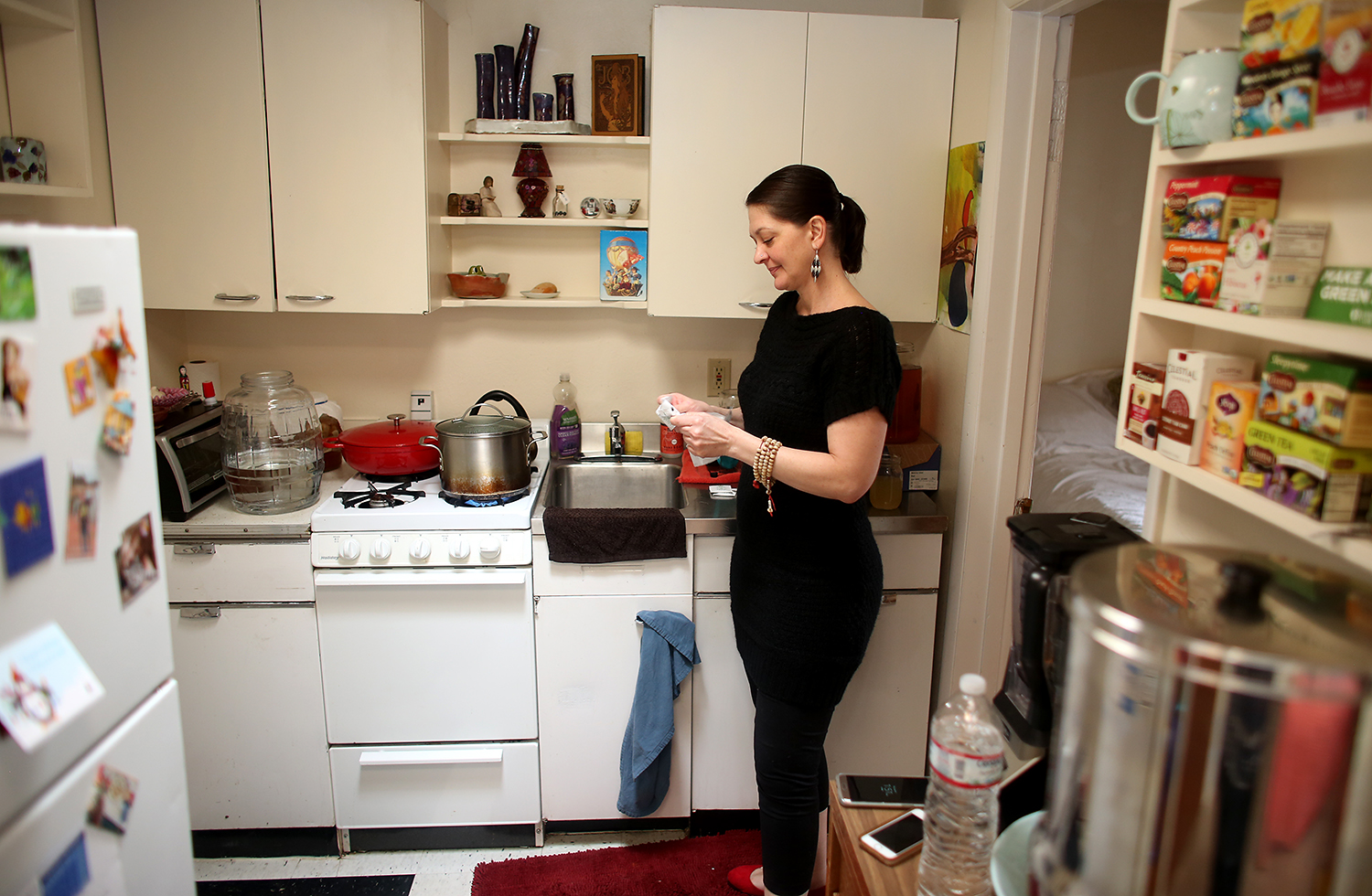 After working all day and, being attentive to my children is very important to me, I didn’t have as much time to just wind down, get creative, go through the motions I go through.

Somehow my creativity just fell by the wayside. And then I felt like it was a very forced act, at one point, to get back into it.

Humanitou: Yoga. I thought of that when you mentioned kombucha being ancient. There are similarities in that yoga is rooted in ancient wisdom and, in recent years, we’ve seen that become another trendy thing in the U.S.

Layla: Right. I’ve been practicing yoga since 1996, and I just remember this huge yoga wave when Madonna started doing it around 1999. It gained a ton of popularity and studios started to pop up left and right.

I think what we’re oblivious to is yoga goes back centuries. It’s an ancient practice.

Humanitou: And it’s so much more than asana (poses), more than what happens in those studios. That’s only one way to practice yoga, though it is a common way to be introduced to it.

Humanitou: So, tell me how you got started with yoga. What is that in your life?

Layla: A nutshell version is I often times dealt with anxiety and restlessness with intense exercise. As a result, I was over-exercising and I was really sore.

So, I started practicing yoga to stretch and then the magic happened, where I started attending classes instead of just a home practice. When somebody else was guiding me I experienced something for the first time: an empty mind. That had never happened to me before, it was this bliss.

It was moving meditation, and still is, to me. I’m a fidgety person. Experiencing that magic, I was hooked. I started experiencing this inner peace. I wanted to know how I could take that with me and keep that. That was the allure for me, the calming aspect. 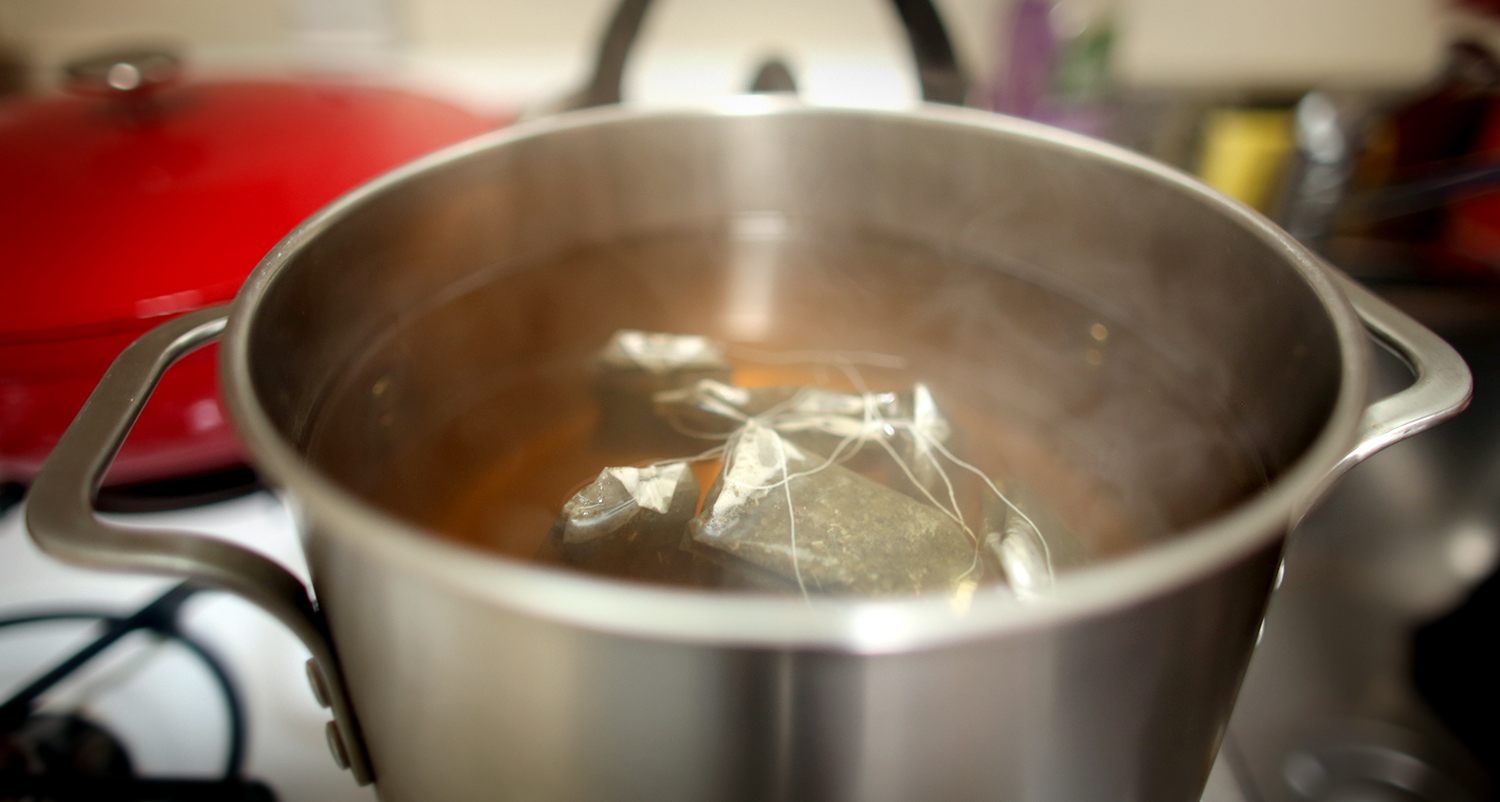 My anxiety would bleed over into everything. Yoga was taking me deeper into myself and looking at where those roots of fear and anxiety were stemming from in the first place.

Then, you have this tremendous body awareness and how your emotions and your breath and your body are all connected.

It’s been noticeable to other people, as well. People were actually commenting on they could see a physical shift in the way I handled things. The further I get away from my yoga mat, the more those old habits return. I become more anxious and completely off-kilter.

It’s amazing. I can be a hot mess and not be practicing, not being diligent about meditating or breathing, even, and I can go to Root, to Jessica Patterson’s Saturday class — I feel like that’s my church, my sanctuary, she gives a little lesson — and by the end of it, everything’s OK, and I’m grounded again.

Humanitou: Speaking of Root, I know you recently started teaching yoga there. It also is where I am part of the yoga apprenticeship and teacher training led by Jessica. You pointed me there, and it’s the perfect spot for me. So, thank you for that. But I digress …

You have a lot of interesting books in your bookcase. One is The Artist’s Way. Have you gone through that book, doing the 12 weeks of creative exercises and all that?

Layla: Started to. I really fell in love with the morning notes, but here’s something really interesting.

About five different people said, “You need The Artist’s Way,” throughout many years. One day I was on a walk in Manitou, right down El Paso Boulevard, and on a chair was this book with some other items and it said, “Free.”

Humanitou: Well, you had to.

Layla: Exactly. So, like with many things in my life, I started it, didn’t finish it. One thing I did take from it, though, was morning notes. I stuck with those for quite a while and I find myself wanting to fall back on them.

What I noticed is when I dump all that out of my head, and I was able to go into my day, kind of like we’re talking about with moving meditation with yoga, it really helped me to start my day without bringing bullshit into it, if that makes any sense.

Humanitou: Yeah. I think that’s Julia Cameron’s main point with those pages, right? To clear the slate and tackle the day.

Layla: And it’s there first thing in the morning! What I liked is it doesn’t have to go anywhere poetic. Just write. What I found amazing is things would come out of me from left field, things I didn’t know were even back there, buzzing.

I feel like it helped me to connect the dots with certain things.

Humanitou: You might have noticed Humanitou started out with creativity — literal art creation — as its leading thread, and humanness followed. I’m refining the focus now, because I think our humanness is the central piece and creativity is inherently part of that, part of all of us.

That said, what inspires you in your life?

Layla: I really appreciate that angle, because something I’ve become really intolerant of in the past five years is small talk. The first thing people ask, “What do you do?” Like our jobs define us.

Let’s face it, some people are following their bliss, some people aren’t. Jobs are formulated for money, to make money for provisions, but who are we at the end of the day? 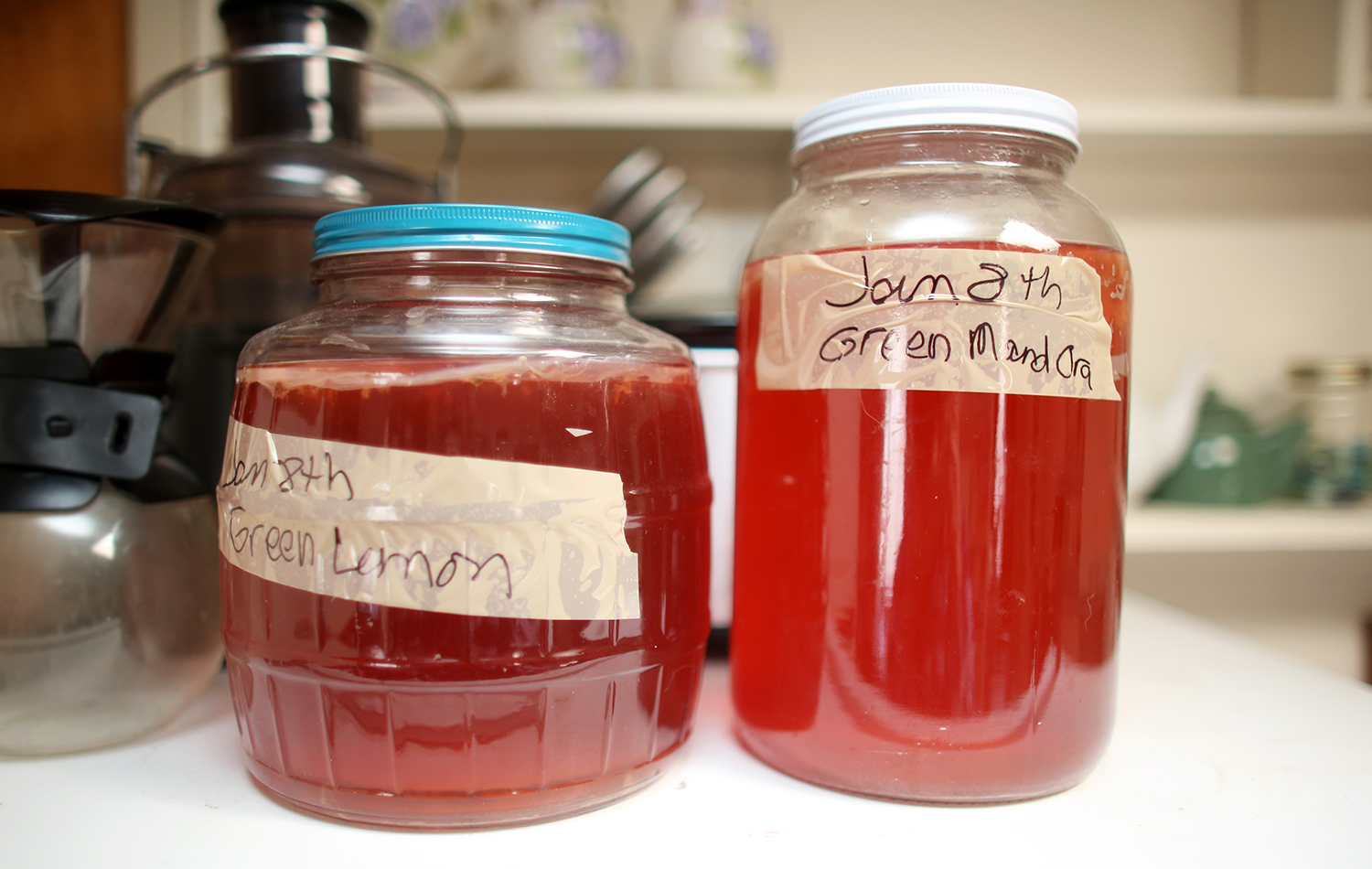 I think the focus should be taken off what people do for a living. If that all burned down, who would you be?

Humanitou: That’s a good look at it.

Layla: I would have to say, healing is a big part of what motivates me to do the things that I do. I’m fascinated with human behavior and where it comes from. I believe there is a reason for everything.

I really appreciate what Sarah Silverman is doing now, with “I love you, America.” Some people are really bummed out that she’s gotten away from the comedy, because she’s so good at that. But she’s really sending the message that we need to learn how to communicate with each other as people.

Somebody who voted for Trump and is from Alabama and has a completely different set of morals and ethics from somebody who is from, you know, San Francisco, who is a liberal or … At the end of the day, we all love our friends, we all love our family, and we want to protect what’s important to us.

So, how did we get so divided?

I like communication. I think it’s good to take the time to get to know people and their stories. Sometimes that’s all it takes for somebody to soften. Maybe nobody really took an interest in it before. We all want to be cared about.

Humanitou: I think we all are much closer than we’re led to believe by the self-interested powers that be. We lose sight of that, because of all the noise. … What has been a shaping experience in your life, something you might look at as a core force, something that guides who you are?

Layla: Number one is never lose yourself. I am guilty of doing that. I think it’s easy to lose ourselves in relationships or roles, and push things about ourselves aside.

I think adults are very conditioned to feel selfish if there are things they are passionate about. The focus is supposed to be on their family all the time, and that’s the number one objective.

But I think one of the biggest crimes we can commit against our children is forgetting who we are and not letting them see we have layers, and we have talents and we have interests. 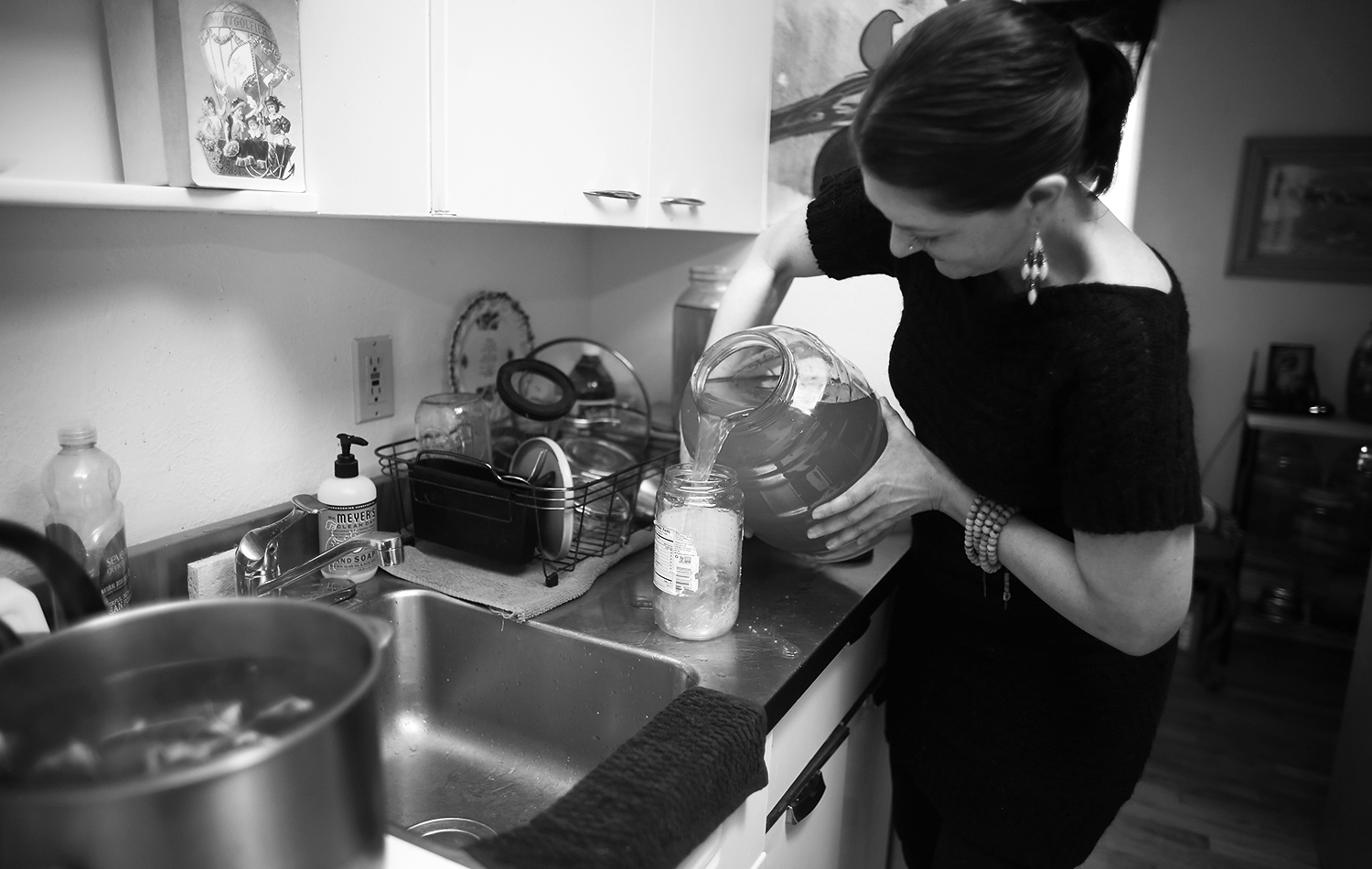 It’s one thing to compromise, especially, in parenting and running a home together. There has to be some kind of middle ground. But we need to quit asking people to live up to our expectations or what’s comfortable for us.

It’s also very important for us to acknowledge the way people appreciate us, even if it’s not our love language or the way we choose or prefer to be loved.

Everybody — friends, family, community — everybody has a way they show love. We need to keep our eyes wide open to what that is, even if it doesn’t naturally resonate with us.