Jeremy Tackett’s intellect runs deep and is rooted in the science and spirituality of his work guiding biodynamic agriculture at Smokebrush Farm in Manitou Springs.

He can and will talk at length about biodynamics and, probably, on many things that stoke his passion for life. Ask questions and you’ll get eloquent answers, honest ones. You’ll learn.

We get into his early adult years on the road, what led him to the Big Apple and in front of the camera as a romance novel cover model, and his heartfelt definition of success. Oh yeah, and we talk about biodynamics.

[Part two of the conversation — “Jeremy Tackett | Biodynamic Agriculture and Smokebrush Farm” —  dives deeper into the process, mantras and philosophies of biodynamic agriculture, and Jeremy’s vision for the farm and his possible future in politics.]

Humanitou: How long has Manitou been home?

Jeremy: I’ve been here five years, but I grew up on the east side of Colorado Springs.

I got out of town right after graduating high school, and went and traveled for a little over a decade. I was in Manhattan for several years. Then, I went on tour with my wife [Caren Tackett] and my daughter [Ravyn] for a few years in the lower 48.

Before my daughter, my wife and I toured Southeast Asia. I backpacked Europe after high school. Just a bunch of roaming around. 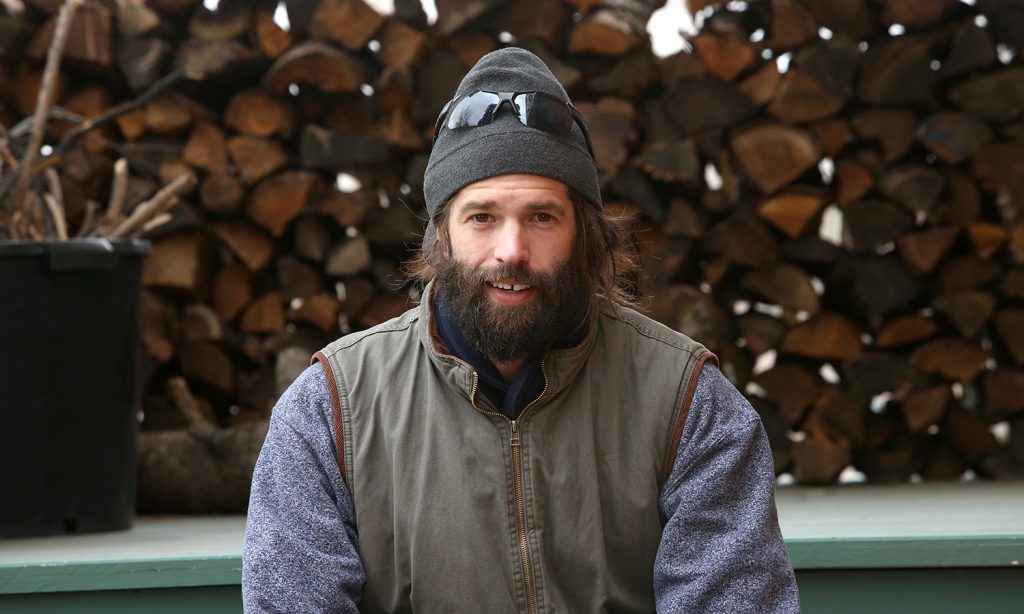 Humanitou: How did you make that work for so long?

Jeremy: When I first backpacked Europe, it was that several months backpacking around, sleeping wherever. Later on, I was in Manhattan for a few years and met my wife, she was a Broadway actress.

So, when we toured Southeast Asia, she was contracted in a Broadway show that went over there, and I was contracted to do set electrics and follow-spot. There, we got to spend a couple months in Beijing, and go over to Taiwan. We had a lot of support and we had small jobs, but it was still constant travel.

And then the same thing when we traveled the lower 48 with my daughter, when she was two to four, four-and-a-half. We were doing Broadway shows all around the U.S. But then, instead of traveling with the company and going on airplanes, we would get reimbursed and drive our van with our dogs all over the lower 48.

Humanitou: What did you do in Manhattan?

Humanitou: I’m so glad I asked the question. What kind of modeling?

Humanitou: Is that something you wanted or were you just going with life’s flow?

I think a little bit of both. I grew up on the east side [of Colorado Springs] and I spent 14 years at a private Baptist school. It was a really small community.

I didn’t have these sort of passions when I was young, meaning biodynamic farming, working with the earth. When I was young, I wanted to be a marine biologist and I loved being by myself in the field, looking for lizards and snakes. That was my favorite pre-pubescent pastime.

But then, getting to be a teenager, I’ve been this size (6’2”) since I was a teenager. We were a small school, so I played all the sports. I didn’t really excel at much. I wasn’t really interested, and I didn’t apply myself at my schoolwork. I was fairly angry at where I ended up and how I was being raised. I didn’t have a big-picture mindset and wasn’t terribly open.

A lot of the celebrations I did have were all around vanity, all around superficial good looks. That was the most common way I was celebrated by others in my youth, and not for any sort of contribution. I got it in my head that that was maybe all I was going to be capable of. It was maybe that or doing odd construction work, because that’s what I’d done up to that point.

So, I went and pursued that. I had these underlying notions of philosophy and exploration, being turned on by things but not really knowing why or knowing the language, just being excited but unable to explain it.

At that time, with continuing to celebrate vanity and superficial nonsense, I didn’t give it a lot of time. I went down some really destructive paths. Somehow I found the light out of those destructive paths. A whole other story.

I had to be open to hearing, whether that’s self or God or Spirit or the Organism or angels or anything, we have to be open to what turns us on, to what excites us.

Humanitou: How did you come to biodynamic farming and this vision you have at Smokebrush Farm?

Jeremy: It was a personal path of where I needed to be, of consciousness and ritual, and some of what turned me on about Buddhist traditions and old Pagan practices, I found in biodynamics.

Before being a biodynamic farmer, I wanted to be a carpenter and a chef, and a brewer, and an alchemist, a gardener. I wanted to work with animals and explore the wildlife. What I found in biodynamics is that I get to be all those things by continuing to explore my connection to the organism.

We refer to the farm as an organism. We’re trying to build an individuality, this kind of one being with all of these separate parts. We could kind of think of it like a coral reef, and the complexities we see on a coral reef, but if we look back we see this one big being with billions of beings that actually contribute to this beautiful life.

That’s what we’re trying to nurture out of these specific intentions here at Smokebrush Farm.

Humanitou: How have your experiences in New York and on the road inform who you are now?

I think one of the biggest things is acknowledging all the similarities we all share, and that we all have the same base needs. If we were to all invest our energy, I mean all seven billion of us, if we were to make a pact that for the next three months we just are going to focus on needs, that would be beautiful. Because we all have the same needs.

Something that has been huge for me over the last 20 months of working on this [Smokebrush Farm] project, one of the mantras is “needs over wants.” Those are the kinds of things that come to me through biodynamic practices, but then I take into my parenting.

I think a lot of the traveling and exploring other cultures really helped form that foundation and seeing how we are all connected. It’s an amazing thing. When we feel connected, when we honor that connection, we’re going to be inspired to practice peace rather than continue to view it as this lofty goal or this unimaginable beast.

I think most of the people with peace stickers or paraphernalia on shirts or earrings still view peace, sometimes, as a unicorn or this destination, and it’s a bummer, because it’s just a practice. If we all did it, it would just be. 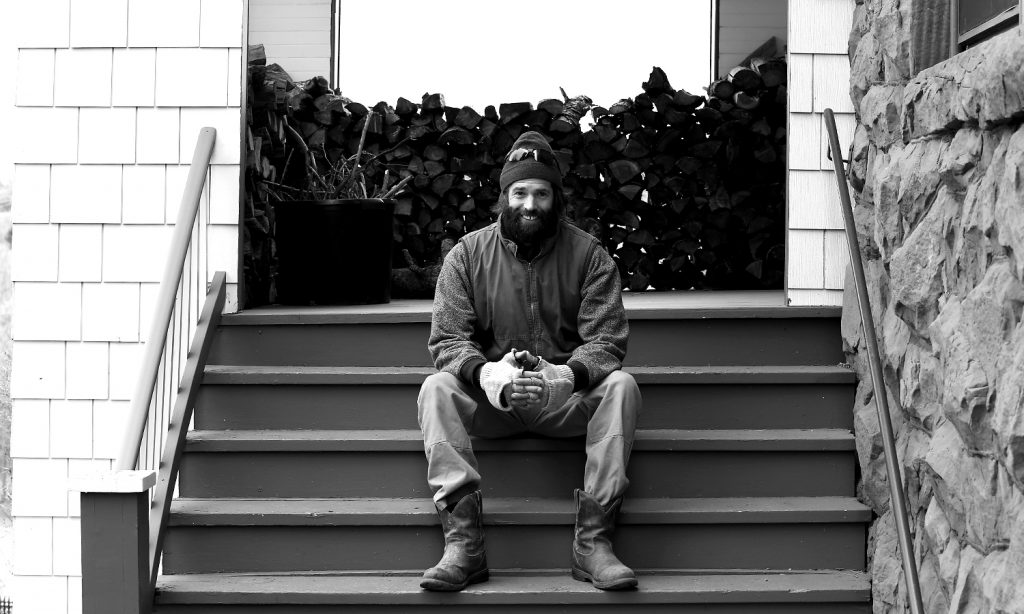 Humanitou: You’ve lived your own path, one I’d say can be described as outside the conventional of college, then career, then set roots, and so on. How do you define success in your life?

Jeremy: One thing I often say on these [Smokebrush Farm] tours is we are all capable. Nature is strong and we are part of nature, but we project weakness, automatically, like it’s our second nature to project weakness onto ourselves, onto others and, definitely, onto plants and animals.

We’re so capable to face our challenges head-on, all of us. I’m not perfect. I’ve hid. Hid in my apartment, hid in my car, hid from challenges in my past, absolutely. But I definitely know that I’m capable to meet them, capable to access that simple courage to step into that awkward place and say, “I’m wrong. I don’t know what I’m doing. Help me.” Maybe I’m saying that to the challenge.

Success. We can’t measure success on things that we consume or that we gather. We can’t so much measure the success even around our identity, I don’t think. I had to be open to hearing, whether that’s self or God or Spirit or the Organism or angels or anything, we have to be open to what turns us on, to what excites us.

We have to be willing to take a risk and be willing to fail. I am where I am now, because of passion and failure, and I haven’t done everything right the first time.

I don’t know every plant that’s on this six acres right now. And I’m not supposed to. Do I want to? Yes. Am I supposed to go spend the next month trying to have everything catalogued in my mind? I don’t think so. I don’t think I’m supposed to force that.

But I think slowly each opportunity will arise and I will seize that opportunity to gain more knowledge. My prayer, that I’ve coined my prayer, everyday is that in all of my ways I acknowledge earth and earth shall be my path. It is my will and desire for my contribution to be received by the entire organism in harmony for the betterment of all beings.