Flowin’ with Phil Stutz at the Slowest Gas Pump Ever

I stood at the gas pump for 25 minutes in 14-degree mountain cold at 8:30 a.m., with groceries now filling the back seat, waiting on the slowest. gas pump. imaginable. to fill my pickup truck’s 36-gallon tank.

By my guesstimation, the pump was putting out ~2/100ths of a gallon of gas per second. Others drove up to the three adjacent pumps, filled up, drove away. Then more came, left. And more. I stood there, with my thoughts:

Do I cut it off and pull around to a different pump?

What about the 90-cent per gallon discount I’m using (grocery store saver-card)? I won’t get that back, if I switch pumps.

(Impatience surges) … But I have the time, and I’m sort of entertained, in a curious kind of way to know how long can this possibly take? How long does it usually take? I’ll have to pay attention next time. (Impatience idles)

Couldn’t we all use a forced slow-down, anyway? This can be some kind of spiritual moment, an opportunity to practice something. We are so impatient and go-go-go all the time and …

(Impatience wanes, before it cycles back and I hit those “Zen” thoughts again; and then at least once more around the loop in the moments to come)

I’ve still got the podcast playing. I hadn’t removed the wireless earbud from my left ear when I left the grocery store. I was in a hurry to get home, get things done.

The earbud-podcast thing is a tactic I use at the grocery store to create a half-bubble for myself as I do the thing I don’t really want to be doing. It’s something I started for anxiety reduction during the pandemic, a semi-cocoon for withdrawal from my surroundings. 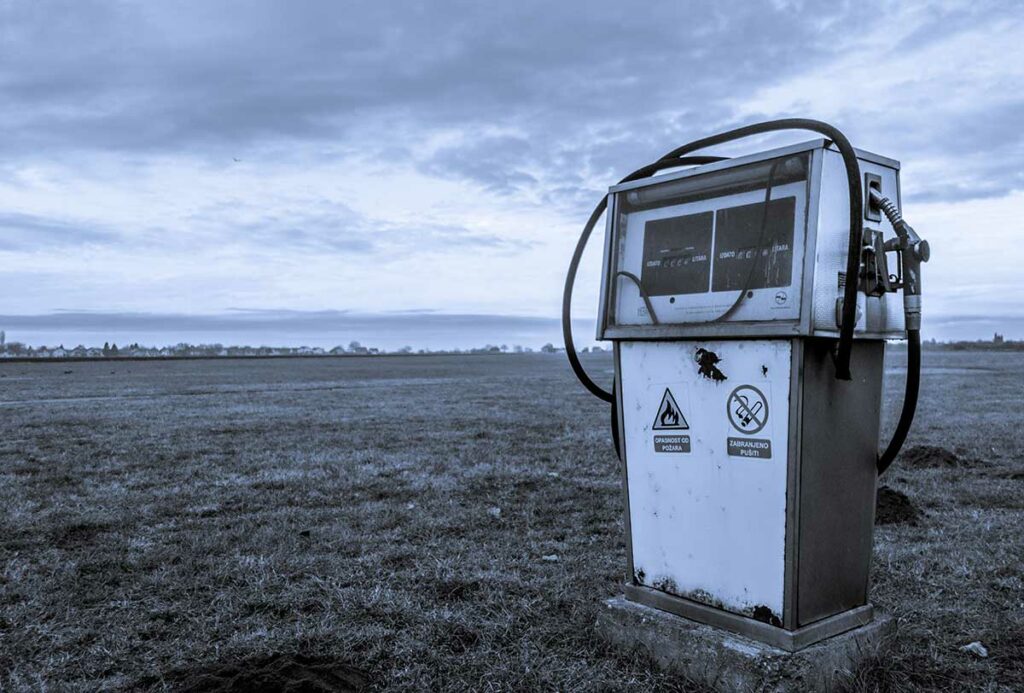 As I stand at the gas pump “losing” time in my morning’s rush-go, I persuade myself that I’m actually using the time well by listening to therapist and author Phil Stutz talking with Dax Shepard on the Armchair Expert podcast.

But then I think about opportunity costs and what my time is worth. And here comes the math, as I stand looking across the highway and beyond the railroad tracks and Railroad Ave. to the school where my older son is right now: Can he see me doing math? Real-world stuff, buddy. Maybe if he was up there in the library?

At a 90-cents per gallon discount, I save $27 on 30 gallons of gas. My deeper calculations: How long would I have to stand here, doing this task at a slow fraction of the normal rate of speed before that financial savings isn’t worth my time?

When should I cut loose and pump elsewhere, or just move on with however filled my tank is at this moment?  Or –

WTF? Why in the hell is that woman next to me pumping gas into her minivan with the engine on? At least she’s not smok– Holy shit! She just lit up! WTFWTF?!

OKkkk … What are the odds I get blown up right here and now? It’s definitely not worth saving 90 cents per gallon, but …

Phil Stutz. I’ve got to watch this new documentary Jonah Hill just put out on him. I had no idea. I’ve seen it in the Netflix lineup, just kept skipping by.

(She drives away. Never want to see her again. I hope I don’t ever make anybody think that about me.)(Shaking off the cringe)

Stutz. Oh, that’s good. Gotta write that down. I wrote something about confidence the other day. I think something similar. Insecurity, confidence … ?

Stutz: “Faith can’t be proven. It has to be chosen, proactively chosen for no reason. As soon as you have a reason or you want some proof of why you should have faith that there’s going to be a good outcome, it’s not faith.

“Faith has to occur, but be chosen, in the face of extreme duress. That’s like the crucible, but once you have that you can take action. Not because you’re sure that the action will succeed, it’s that you’ve developed faith so that if it doesn’t succeed, you have the power to keep on going.”

Alright, I’ve crossed 25 gallons. How about a couple more? The longer I stand here thinking about it, the closer it gets, the easier it is to just let it happen … 27 it is.

Stutz: “People think, it’s: become confident first and then take action.“That’s wrong. You’d be waiting forever for that. The best way to build up confidence is to act. It’s counterintuitive.”

Yeah, I know I wrote something similar the other day. Kind of. What was that?

Stutz. He seems really cool. I’ve got to write this stuff down. How had I never heard of him before?

The gas pump shuts off.