Time and again I look at something I’ve created and feel some childlike wonder that this thing before my eyes happened at all. Gratefully.

Only minutes before, this space, now so colorful, textured and full of story and life, and provocations for the curious onlooker, was a blank canvas, nothing doin’. Until something was done.

Whether we become known now or posthumously or never as an artist, each work we make has the reasonable opportunity to be the only of its kind in the universe, in the history of all that was or will be. That makes our creative endeavors worthy in and of themselves.

I’m not saying “original.” It’s said there’s nothing original under the sun. Fair enough, but that also takes a certain negative bend in our lens to overlook the fine details, and that’s where the differences lie.

I am saying that with every word choice in a poem, song or manuscript, with every brush stroke or, in my case in the works below, every looping scrawl I illegibly flow across the canvas, we are putting together something that’s never been exactly like that before.

In a world of billions of human beings, I think those fine lines between my fingerprints and yours are noteworthy enough that we can feel honest and joyful in the relative originality of what we creatively add to the history of the universe.

This worthiness is accessible to everyone. String a poetic flow on a piece of scratch paper, or in your head on a walk or in the shower, and there’s a solid chance no one has ever strung those words, that feeling, that moment together in just such a way before. Even we, as the creators, won’t feel them in just the same way ever again.

Creating in any form is a transformative, mood-shifting, life-altering experience. It can be all our own. Or shared. Whatever it is, it moves energy and carries the power to ripple throughout us, throughout our lives. 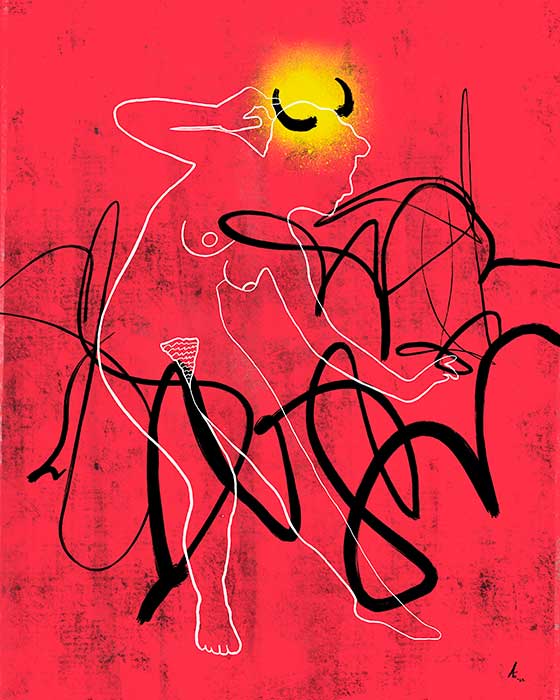 “So Pretty The Flower” by Adam Williams | Humanitou

Where a white page comes to life as poetry, lyrics, music and scripts …

Where visual art rises on a torn flap of cardboard in a flow known only this once, never to be created again just so …

(and in so many other forms of expression … )

There is the potential of transformative magic. Moving from nothing to something so snowflake, fingerprint, earthy-moon rare is everything.

I’ll admit I don’t always remember that in the heat of it, when I’m ’bout to lose my religion. (R.E.M.’s here.) When I’m struggling or forcing, or just end up in a place I don’t feel connected to, it’s not the Muse and the magic I’m thinking about.

In that moment, it’s the egoic discomfort of something unresolved that hints at failure. But in the lighter moments of my mind, I feel the joy of that blank-canvas magic that conjured something from nothing to everything. And it fuels me.

That’s how I recently had a five-hour marathon explosion in creating dozens of works that became “Phallacies 76.” While that level of productive flow is extraordinary for me, I do often make one work after another in a sitting.

There’s an Italian term for painting a painting start to finish, all in one sitting: alla prima. I couldn’t do that in the analog, material world. With digital, using Procreate on my iPad, I can move much more quickly, making adjustments and experimenting along the way in ways I couldn’t on physical paper or canvas.

I also get to make much more work that I like/love much more often this way. That means many more of those self-inspiring moments when I can look at a finished work and smile and know that I did that. Not someone else, not someone else ever. Forever ever?! Yeah.

Damn! Seriously, that’s a specialness we owe ourselves the permission and opportunity to feel and acknowledge. First, there was nothing. And then there was a special something. I know I keep saying that, but it’s a mind-blowing thing. Artists summon things that previously didn’t exist in the world! Feel it with me. And the artwork I make is something I feel in relationship to forever more.

This almost feels like I’m spinning up a TV afterschool special here, trying to persuade you to create art right now … annnd say no to drugs, or McGruff the Crime Dog and Smokey the Bear gonna gitcha!

But really, the moments I’ve allowed myself to engage in life in a childlike-wondery way are few and far between. REO Speedwagon knows, I can’t fight this feeling. Gotta roll with it and ripple the gospel, bloggy-style. (Alright, now Snoop is on the Blogg … I hear you, enough dog(g) and music references for today. Gone too far. I’m done. Promise.) 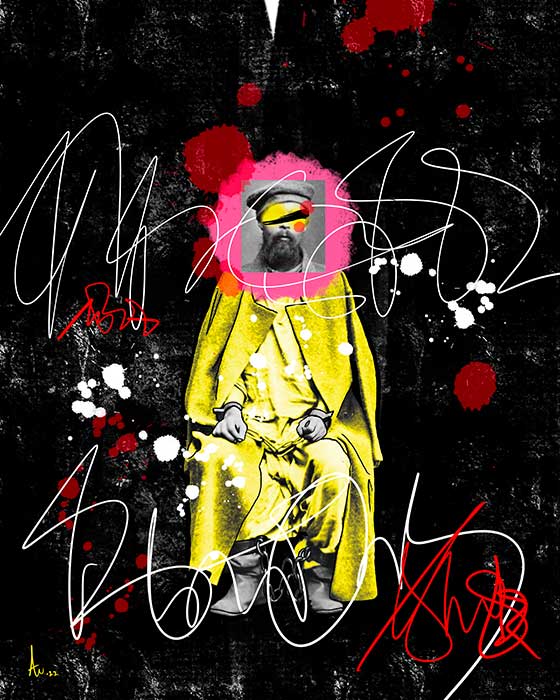 The former New York Times columnist David Carr wrote in his harrowing memoir The Night of the Gun, about when he was considering whether to write that memoir or not, that he recognized, “I am not the book, but the book is me.”

To start with a blank slate, a place that used to stir fears and anxieties around a need to be good, be perfect, be worthy, not waste art supplies, and to land with something I feel good about, feel connected to …

To see the work that I just made (or was spiritual conduit to and managed to stay out of the way of), is to see myself, and to do so in an affirming light.

Okay, I said this transformation of nothing to something is everything. I said it’s life-altering. I’ll concede that when this (soul?) train got to chuffing (promise broken), I didn’t know this was the big-philosophy destination. But I’m writing out loud, to some extent, and epiphanies hath come.

That, I suppose, is the truly special blank-canvas magic of opening ourselves to our creativity. Gratefully.

See work in the galleries. Read more on the blog. Listen to the Humanitou podcast.